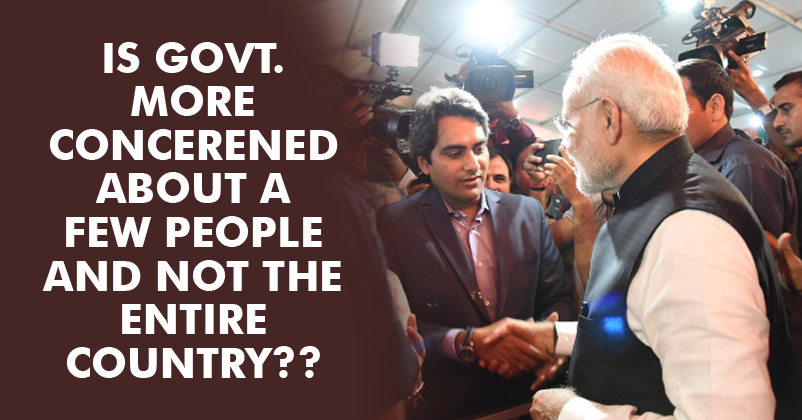 It was the year 2014 when every single person in India turned out to be a pseudo political analyst. His views and expressions became quite vocal. Every single person had a strong and firm ideology on different issues. It was a beautiful sight to watch until things started out to turn ugly. Yes, when a majority of the country was discussing about the issues that were really worthy of their time, a section of the society went totally off track and prioritized their own issues.

For them, it was not for the greater good of the country, but was more for the side they were supporting. The General Election of 2014 in India was apparently divided into just ONE side. Yes, One side only because the other side didn’t stand any chance against the great messiah image of Narendra Modi that our Indian media built with an utmost care. Perhaps the regular news hour prime time shows depicting Narendra Modi and BJP Party’s greatness made a huge impact in the minds of their viewers. However, even after 2 years of elections and BJP Party governing the country, the scenario is same. People have forgotten to discuss the issues that matter the most but instead are still doing the talk shows for further future elections into different states. And anyone who questions or criticizes the government is now straight away declared as a TRAITOR or ANTI-NATIONALIST.

These are indeed big words for something as simple as complaining about the insecurity that a woman feels while she walks on streets. And when her husband talks about it, his entire family gets thrashed down on social media. When a person slams corruption prevailing in the country on social media by directly tweeting the incident on Twitter, he again gets thrashed down by the so-called ‘blind followers’ because now, it’s the BJP government in power who according to them can’t make mistakes.

When a bunch of kids raises their voice against the injustice being served in our country to the farmers and many people from the different section of the society, they are again tagged as traitors and ANTI-NATIONALISTS. Videos are doctored with altered slogans so as to make conspiracies against them.

Well, did you ever notice the BIG CONNECTION among all these ANTI-NATIONALIST & TRAITORS tagged by such ‘blind followers? The connection is that they all criticized the government at some point during their talks. But the question that I want to ask is that SINCE WHEN THE ACTION OF CRITICIZING OUR GOVERNMENT BECAME A CRITERIA OF TAGGING SOMEONE AS ANTI-NATIONALIST OR TRAITOR? Fun fact, it’s a criterion that makes our country DEMOCRATIC ! !

We as a nation needs to understand that such mob-verdicts are not going to serve any justice to anyone. To tag anyone as ‘ENEMY OF THE STATE’, we have a proper code of conduct written in our constitution that doesn’t ask any ‘blind followers’ to take law in their hands. The people who shout and allege everyone to be ANTI-NATIONALIST are currently the biggest living examples of hypocrites that we can witness.

BJP Party members are always the first ones to tag anyone who opposes their ideologies as TRAITORS and ANTINATIONALIST. Apparently, a few days ago news broke out about the BJP volunteers turning out to be ISI AGENTS. This word – ‘ISI KA AGENT’ was something that BJP volunteers always used to accuse their political rivals and people criticizing the Government. If one goes by the definition of ANTI-NATIONALIST, it means someone who tries to break the country. Communal Riots are one of the oldest ways to break the peace. There are many people who thrive on vote-bank politics and this is one of the most lethal forms of ANTI-NATIONALISM. It was the BJP Party’s Uttar Pradesh Chief Keshav Maurya who sparked the Ram Mandir-Babri Masjid controversy just before the elections where he promised to make ‘A MASSIVE RAM MANDIR’ once his party comes in power. Wasn’t that a clear sign of VOTE BANK politics that eventually leads to disrupt in peace in our society? But sadly, no one cares to take a look at such cheap tricks. BJP Party members preach big about National Anthem and respect that we should pay to it. It’s indeed a good step. But what if I say that there is a certain organization who didn’t consider the tricolor as our National Flag and still possibly doesn’t believe in Republic Day as they don’t consider Indian Constitution as an authentic one. Yes, it’a big disrespect to our country. Every ‘blind follower’ should now raise his voice, but he can’t as that very organization is RSS. No one dares to talk about them. I wonder what is the threat? Try to do a bit of research in this. I am leaving this topic on you.

It is quite clear that for certain group of people, it is the Government or the party that matters the most and not the collective overall development of our country. We, as a nation needs to ignore the so called ‘words of wisdom’ of such ‘blind followers’ and work towards the betterment of our country by maintaining peace and harmony. I don’t want to specifically target BJP party members or their followers, but to the BLIND FOLLOWERS who do things without thinking. There are still a lot of good men in BJP Party, or moreover in every Political Party in India.

What do you think about the issues that I have raised in this article, please share your opinions in the comment section below.

The Letter Of This 12 Year Old Assam Girl To PM Modi Is Going Viral! Here’s What She Requested!
Kohli Shared A Lovely Pic With Anushka With A Romantic Message On V-Day But Later Deleted It!