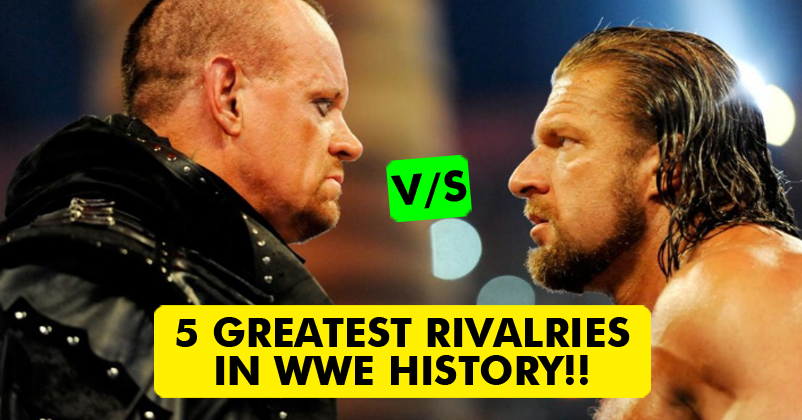 WWE has been the biggest source of entertainment for the wrestling fans for several decades. Many of us have grown up watching the sport of pro-wrestling, many of us have even tried the wrestling finishers on our siblings. Hitting your younger brother with a ‘chokeslam’ or giving him a ‘stunner’, then begging him not to tell the mother. Of course, WWE is a scripted form of entertainment. As many of you know that WWE is a sports entertainment industry. It’s not just about wrestling anymore, it’s about entertaining the crowd anyway possible, larger than life characters, bringing out the emotions. The creatives write some amazing feuds, the superstars giving all their heart in the wrestling ring, performing risky moves just to entertain us. It’s an old saying in the wrestling world, you’re only as good as your opponent is. What makes a sport great, it’s the competitiveness of the game. Rivalries are the backbone of any sport. They create stories, match-ups that attract the audiences, fans will pay just to see a particular pairing compete with each other. Rivalries take the fans on emotional roller coaster rides, they leave us with iconic matches, unforgettable promos, and moments that will make us feel proud to be a wrestling fan. We have seen many greatest rivalries, feuds and vendettas in the history of the WWE, but some of them have created a bit larger room in our hearts. So let’s take a look at Some Of The Greatest Rivalries In The History Of WWE, This Will Blow Your Mind!

The Rock Vs Triple H This rivalry helped in boosting the careers of two young talents who would later go on to become the giants in the business. Both these wrestlers squared off at RAW for the first time, The Rock and Triple H had an exciting match for the Intercontinental Championship, Hunter Hearst Helmsley was beaten by The Rock in that match. It was the first ever clash between the two legends. Their rivalry got intense after the SummerSlam and the ladder match for the Intercontinental Championship, the matches brought out their best and prepared for the next main event stage. Both the superstars fought many times after that. The Rock-Austin rivalry is considered one of the best, if not the best rivalry in the history of the industry. They went head-to-head and main evented three big WrestleManias. The fact that both of them were able to keep their rivalry interesting for three WrestleMania events is the proof of their greatness. Very few rivalries can stand the test of time, Rock-Austin feud is one of them. Their rivalry had incredible drama, amazing entertainment and exquisite crowd involvement. Their rivalry was also very profitable from the business standpoint, as it contributed a lot in the growth of the WWE.

The Undertaker Vs Mankind The Undertaker is undoubtedly the greatest WWE superstar of all time. He had so many feuds, memorable rivalries, fights that cemented his legacy as the greatest ever. Mankind is none other than Mick Foley, it was one of the three faces of Foley. Foley made his debut as Mankind in April 1996. When he started his career, he was on the lower mid-card, the critics dismissed him and the fans weren’t really digging him. But his rivalry with The Undertaker made him famous in the wrestling industry. Mick Foley was a tough and deranged freak, this gained him a lot of respect from the fans. Both The Undertaker and Mankind brought immense hard-hitting matches for the first time in different styles. In the summer of 1998, there was a Hell in a cell match between the two wrestlers. The match is believed to be the most heart wrenching and memorable match in the WWE history. Mankind showed immense endurance towards pain and it was this match which made him the ‘Hardcore Legend’. John Cena-Randy Orton rivalry could definitely be held up as one of the top rivalries in WWE history. Both of these superstars came into the company at the same time, they both rose to the top of the card at the same time. They both have different personas, but they both wanted to be on the top, and they battled it out so many times. Their battle began in 2007, they were involved in many multi-wrestler matches, Orton would finally square off against John Cena in a one-on-one match-up at SummerSlam. These wrestlers have wrestled more than 20 times against each other. Shawn Michaels and Chris Jericho indulged into an intense rivalry that resulted in many bloody fights. They faced each other in a Wrestlemania classic match. They resumed their rivalry again in 2008. Things got worse when Chris Jericho abused the family of Shawn Michaels, he even punched Rebecca, Shawn’s wife. At Unforgiven, Shawn and Jericho settled their bad blood, the match was brutal and referees had to intervene in between.

So these were some of the greatest rivalries in the WWE history. Please comment and share your views on wrestling rivalries. Which rivalry is your favorite ?