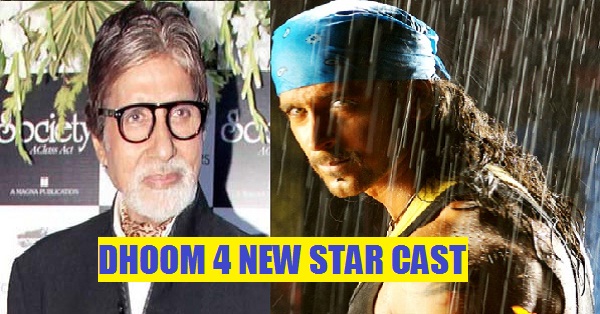 The Greek God ‘Hrithik Roshan’ is set to return to DHOOM franchise after skipping the third movie of the famous action series. Dhoom 4 the next installment of the movie is set to hit back with the spicier cast this time.

According to sources, the film may repeat some of its previous cast once again, but some new actors might join the movie this time. The Director of DHOOM 3 Vijay Krishna Acharya aka Victor has approached and signed Senior Bachchan (Amitabh Bachchan) and Hrithik Roshan for the 4th installment of the movie. However, it is still unclear that Amitabh Bachchan will share the screen with his son Abhishek Bachchan or not. Since, Abhishek plays an integral part of Inspector Jai Dixit in the action series, it is highly unlikely that he would be missed from the cast. The reports also added that scripting of the film has already started.

The last movie where we saw the Heartthrob Hrithik Roshan and Amitabh Bachchan was Farhan Akhtar’s ‘Lakshya’ in 2004.

We can’t wait for the film to release and would like to know what do you think about the duo appearing in the next iteration of the movie in the comments section below.