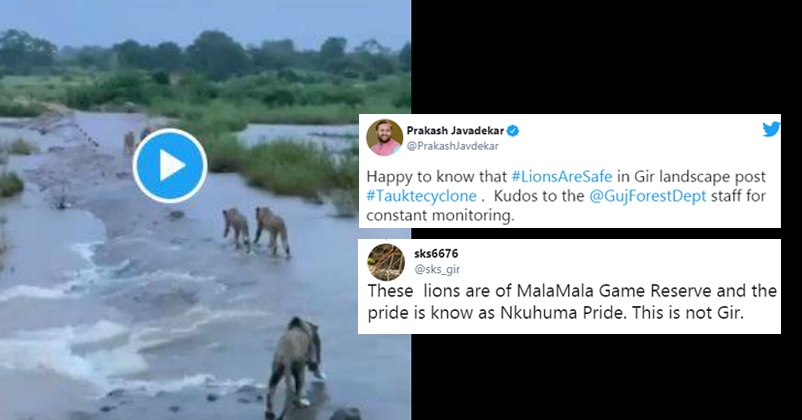 The coastal states of India faced the wrath of the cyclone Tauktae recently and five states – Maharashtra, Tamil Nadu, Karnataka, Kerala and Gujarat were the most affected. There was a huge loss of property, some lives were also lost due to this natural calamity and many people were concerned about the wildlife in these critical times too.

As many people were concerned about the wildlife, Dr. Rajiv Gupta, Additional Chief Secretary of Forest & Environment Department, Gujarat, posted a video on the micro-blogging site Twitter in which pride of lions was seen crossing the river that was surrounded by the tall Savannah grass. The tweet was later deleted but in that tweet, Dr. Rajiv Gupta wrote that the lions are absolutely safe after the cyclone Tauktae and the field staff has been monitoring their movement constantly. 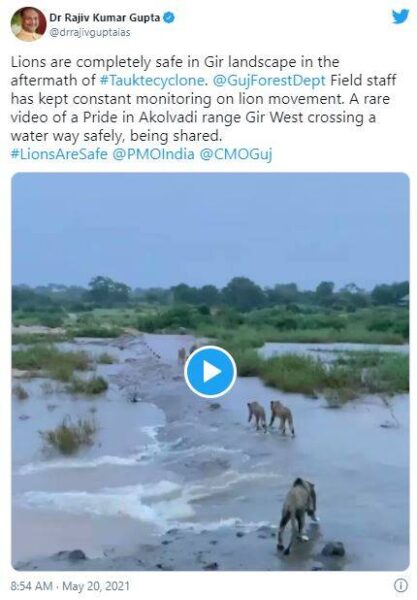 Dr. Rajiv Gupta’s tweet was soon shared by Prakash Javadekar, the BJP politician who also handles the ministry of environment, forest and climate change. He showered praises on the Gujarat forest department for monitoring the lions on a constant basis.

Many people praised the Gujarat forest department for their prompt action and for being responsible even in these tough times but there were some who had an eye for detail and they soon caught the blunder which was made by Dr. Rajiv Gupta by posting the video. While some were doubtful that this video is from Gir, many were sure that the lions are not Asiatic and there were few who declared that the video is from the Mala Mala game reserve, South Africa.

Check out the reactions:

Those are not lions from Gir but from Mala Mala Game Reserve!!! Why don’t y’all bother to check it once?

This is not from GIR and Those are not an Asiatic Lions.

These lions are of MalaMala Game Reserve and the pride is know as Nkuhuma Pride. This is not Gir.

Is it Gir? Such a lush green at this time? In May? In just one rain fall..wow👌👍

This is our Environment and Forest Minister (slow claps)….
Can't even bother to get actual information from the reserves.
Must be really busy 👏👏👏👏

@PMOIndia @CMOGuj Sirji this is video of Malamala game reserve footage from south africa. Kindly check twice before sharing information and putting fake video sir. There is link below you can check it. https://t.co/M2aH83CHaG

So this how well you are informed and handling your Ministry. The video was from South Africa based MalaMala Game Reserve @narendramodi need to evaluate properly his team’s work on daily basis. 🙏

The reality is that the video clip is from the Mala Mala Game Reserve which is the largest and the oldest game reserve of South Africa and it was shared in Feb 2021.

After this, Dr. Rajiv Gupta deleted the video posted by him earlier and also gave a clarification. He tweeted, “It is regretted that a wrong video was posted along with statement of Lion safety in Gir landscape. PCCF (Wild Life) Sh Shyamal Tikadar has apologized for his lapse & indiscretion. Inconvenience &confusion caused is sincerely regretted with an assurance for double caution in future.”

It is regretted that a wrong video was posted along with statement of Lion safety in Gir landscape.PCCF(Wild Life)Sh Shyamal Tikadar has apologised for his lapse & indiscretion.Inconvenience &confusion caused is sincerely regretted with an assurance for double caution in future. pic.twitter.com/ibs6n31LCU

Later on, the Chief Conservator of Forests, Junagadh Wildlife Circle, DT Vasavada posted a video in which he stated that there is nothing to worry as all the lions of Gir-Brihadgir are safe and not even a single lion has gone missing after the cyclone Tauktae wreaked havoc in Gujarat.

The Gujarat Forest department also came into action soon and issued a letter as well as posted the photos of two lions wandering in their habitat.

The mistake was quite silly in view of the fact that they have such a big responsibility on their shoulders. What do you have to say in this regard? Let us know.