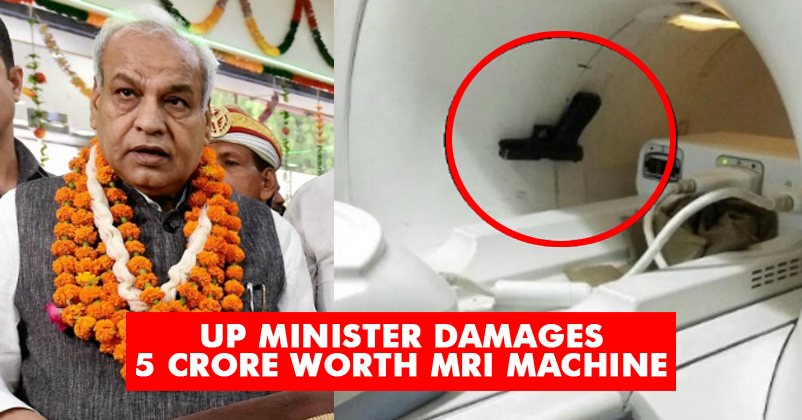 Government leaders and rules have become antonyms these days, so it’s never surprising to see the politicians breaking some really critical laws. But shocking or not, these rule violations sometimes lead to big losses.

Recently an MRI machine worth Rs 5 crores stopped working and came to a standstill after the Uttar Pradesh Textile Minister Satyadev Pachauri (BJP) entered the MRI room for diagnostics along with his gun.

The minister was taken to Ram Manohar Lohia Institute of Medical Sciences in Lucknow after he fell unconscious during a speech. Despite the instructions, his gunner followed the minister to MRI room with the loaded gun. The magnetic field of machine attracted the gun towards it, thus resulting in the damage. According to local media reports as soon as the minister saw the pistol being pulled out and sticking to the machine, he ran away from the MRI room.

The cost of repairing the 5-crore machine will be around Rs 40-50 lakhs and will take at least a week to fix it. Notably, the machine has been out of the use since past two weeks already. The Medical Superintendent of the Hospital, Dr Subrat Chadra said-

“I will put up big notices everywhere in the hospital that people should not enter restricted areas without permission. I am not sure how the security officer managed to go in, we have launched an enquiry into it. The machine itself will take over 15 days to come back to action.”

Now, this is the height. Isn’t it? A country like ours have people roaming around with negligible security, and these leaders who have 24*7 activated security feel vulnerable.

Continue Reading
You may also like...
Related Topics:India, Politics, UP

Woman From Bihar Sent A Gift To PM Modi! The Response She Got From PM Was Just Amazing
Raveena Tandon Slammed By Twitterati For Saree Tweets! She Had To Apologize