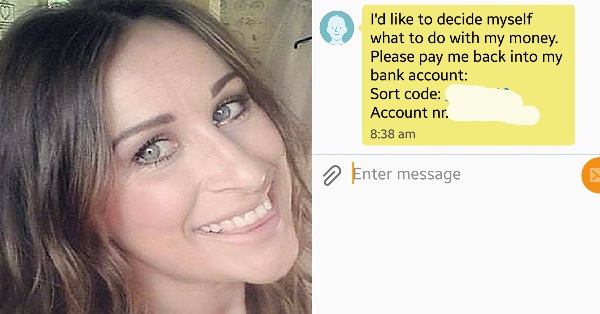 The 21st generation dating app “Tinder” is popular among youngsters around the world. When two people on the app likes each profile, Tinder lets them know so that they can take the next step. But not every date happened because of Tinder goes well.

The story is of Islington, England where 28-year-old Lauren Crouch recently went on a Tinder date which she might never forget. She took to her blog to explain how the guy rejected her suggestion of grabbing an alcoholic drink, instead he suggested to grab a coffee across the road.

During having coffee and rather getting bored with unusual dull conversation, they ended the date on a dull but nicer note.

Later that day, the guy offered her to cook food and invited her to his house for dinner. She declined the offer decently by saying,” She doesn’t feel comfortable going to someone’s house who she barely knows.” When he thought it’s of no use to asking her out again and begging for a second date, he demanded his £3.50 which he paid for her coffee. It came as shock and a bit unsurprising for the girl to see a guy asking for just £3.50, as the date didn’t go well and ended on his terms. So she decided to reply him with this message.

Till now you must have got that the guy is a real stubborn, but the following message crossed all the limits Its really hilarious to see a guy demanding his money back from a girl just because the date didn’t end on his terms. Well, Have you ever been demanded money back from a date that went wrong? Let us know in the comments section below.

Continue Reading
You may also like...
Related Topics:Guy Demands His Money Back From Girl After Their Date Didn't Go Well, tinder

This Man Burnt Cash Worth Rs. 13 Crores But Why?
Ten Memorable Things From 90s Kids Childhood Which You Have Probably Forgotten