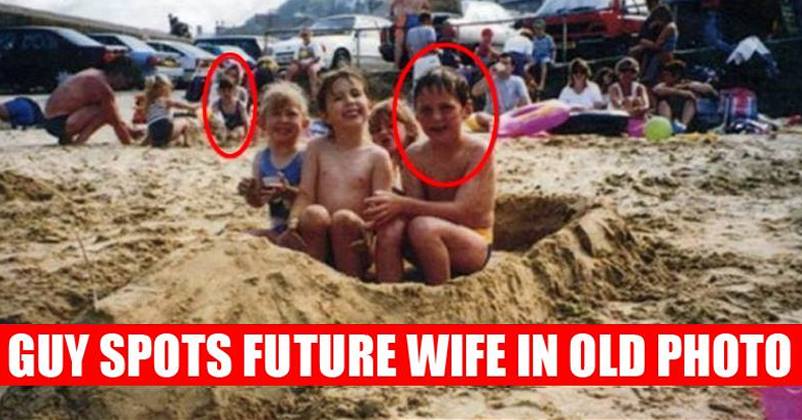 Aimee Maiden and Nick Wheeler, were enjoying an old photo album at Nick’s grandparents’ place few weeks before marriage. And guess what they found? Well, they stumbled upon an old photograph where Nick was seated in a huge sand boat and was posing in front of camera. Just few feet away in the background, you won’t imagine who was enjoying the sand play. Well, you guessed it right! It was Aimee, his fiancé. That time, she was very young and was building sand castles and having a good time with her family. She never knew that her Prince Charming was just 10 feet away in the sand. Well, the picture was taken in the year 1994 in Cornwall UK, the place where Aimee was born and brought up. She regularly visited the beach with her family. On the other hand, Nick’s family stayed in Kent, around 300 miles away and had visited the beach for a vacation.

Just imagine the situation! I mean what if someone came and told them that they are going to be married in future? They would have ridiculed him that time!

So guys, what do you feel about their story? Do let us in the comments box below!

19 Of Your Favorite Superheroes Then & Now
Here’s Why We Say ‘Ram Naam Satya Hai’ While Carrying The Dead To Cremation Ground!