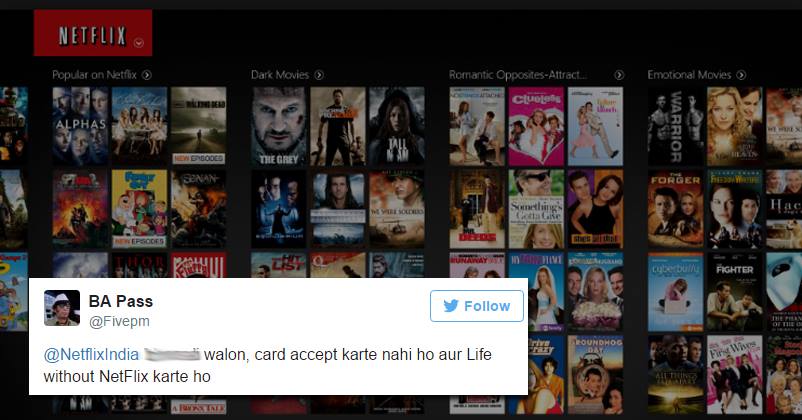 Often, people take to Twitter handle these days, be it to share some good news, be it to congratulate someone or be it to abuse someone. Yes, you heard it right. Many a times, people are seen abusing each other, without any reason. One recent example is that of a Twitter user who abused Netflix in a very bad way. Yes, the guy used hard-core abusive language! Well, what happened was that when Netflix randomly left a post with a hashtag #LifeWithoutNetflix, there was one person with name BA Pass who left an abusive tweet in reply to that. This is what Netflix posted;

Watch your favourite shows on the go. You don't have to live a #LifeWithoutNetflix any more. pic.twitter.com/MRLHnjFCtR

As soon as Netflix posted this, the guy i.e. BA pass replied with this tweet;

Really very abusive, isn’t it? Well, he thought that he would leave the tweet and Netflix wouldn’t notice it. But, the opposite happened; Netflix noticed the tweet and replied as well. See what is Netflix’s reply!

bhai thand rakh, head over to https://t.co/WOfdX7kNvy to resolve any issues!

Yes, it was a very chilled out reply and it is good on Netflix’s part that they didn’t get into unnecessary controversies. So guys, what do you feel about this? Do let us know your comments in our comments section below.