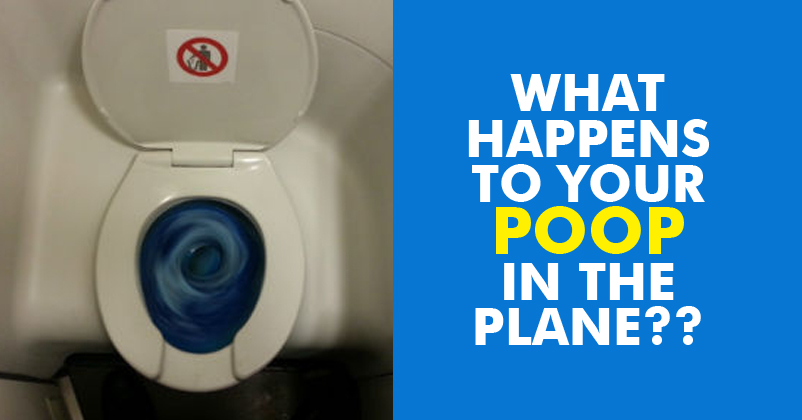 Coming from a typical middle class family, I always had so many question back in my mind for the things that I didn’t even try. Mostly in my life, I have traveled by Train. And yes, I did use the Indian Railway Washroom. Although the word ‘washroom’ isn’t the most appropriate phase that I should be using after I was done doing my business over there. Comedian Abish Mathews portrays the scenario perfectly by saying that ‘If you can shit in an Indian Railway Bathroom, you can shit through an earthquake’. Although I was quite lucky to get tickets in Rajdhani Trains, so my experience was comparatively quite better. Anyway, so we all know the science behind the flushing of toilet in the Indian Railway Washroom, which technically has no Science behind it. It is just the gravity that acts upon the mass and eventually with the flow of minimum pressurized water, scores are settled.

But, when I got the chance to travel in an Airplane, apart from clicking selfies with the clouds at the window seat and checking in the Airport via my Facebook account, one thing that was poking me was to use the washroom. Yes, it is kinda weird, but just admit it that we all had various theories regarding what happens to human waste after it is flushed down in Airplane washroom. So first let me answer the most asked question. NO, the human waste does not not simply fall off the Airplane. If it would, we would definitely know about it, RIGHT ?

Since Airplane cabins are pressurized, the Railway flushing system of discharging the waste right outside won’t work.

During 1980s Airplanes used used Anotec, a blue deodorizing liquid, to push waste from the pot into the onboard storage tanks. Electric pumps were used to drive the process, circulating the fresh fluid through with every single flush. Although this process was a successful one, but this system posed some significant drawbacks. Airplanes had to carry hundreds of gallons of Anotec on every flight, which in turn increased their fuel consumption and reduced the a significant number of passengers that they could carry. Currently the Airplanes are using the Vacuum Based Flushing System where the bottom of the pot is opened by pressing the flush button and the human waste is exposed to a pneumatic vacuum. That vacuum sucks the human waste down to the plane’s sewer line into the storage tank. A non-stick Teflon coating around the inside of the pot and the sewer lines assists in the transfer of human waste. Then, waste remains in the storage tank for the rest of the time till it lands, and at last it is vacuumed out by the honey truck, a pretty name for a vehicle with a pretty filthy job. Well, this is it. I hope I was able to explain the concept in a much better way. If you have any extra relevant information that you want to share with our readers, please feel comfortable to write it down in the comment section below.

One Plus 3 Dropped From 750 Feet Height, Result Is Shocking
This Hotel Allows You To Enjoy Honeymoon In France & Switzerland Simultaneously! Confused?