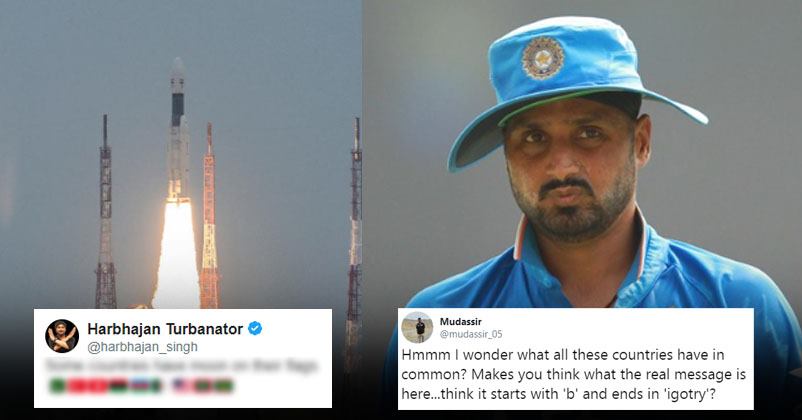 Chandrayaan 2 was successfully launched to its mission to reach the south pole of the Moon, on Monday. While Indians are feeling proud as India is the first country to send a satellite on the southernmost part of Moon people across the globe are congratulating ISRO for its big achievement. Former Indian cricketer and ace bowler Harbhajan Singh also tweeted about the successful launching of Chandrayaan 2 but in his own unique way which did not go well with the masses.

Some countries have moon on their flags
🇵🇰🇹🇷🇹🇳🇱🇾🇦🇿🇩🇿🇲🇾🇲🇻🇲🇷

While some countries having their flags on moon
🇺🇸 🇷🇺 🇮🇳 🇨🇳#Chandrayaan2theMoon

Harbhajan’s tweet divided the twitter into two groups. The first group hailed the “turbanator” for taunting Pakistan while the other group did not find it funny and slammed the former cricketer. Some even called Singh’s tweet “racist” and “Islamophobic”.

May I disturb this bigoted story of yours with some reality? This is the Nepal flag, also with the crescent moon on it. Literally 'flagging' all 'Muslim' countries, is the essence of Islamophobic baiting & profiling. Wish you cd learn from Sri Lankan cricketers & rise above this. pic.twitter.com/HMPkexOE2V

What a shame, open bigotry. Reaching moon is not the best indicator for development. Some countries with moon on their flags are much ahead on HDI than others who have flags on moon.
During a proud national moment, you must add a communal angle, no? Pathetic

"be humble in victory and gracious in defeat"
Also looks like a bad case of WhatsApp forward fever, please get it checked. #cringey https://t.co/c8TXH5mA3m

Singapore, Laos, Mongolia, Nepal
also have the moon on their country flags. Nepal was Hindu majority till a few years ago. Sad to see Harbhajanamplifying Hindutva trope and picking on the Muslim nations. Not cool. https://t.co/Ap5AwQnahQ

Was this supposed to be funny? https://t.co/ZoAe12KPQz

Hmmm I wonder what all these countries have in common? Makes you think what the real message is here…think it starts with 'b' and ends in 'igotry'? https://t.co/wEKJ4kBsyy

Your Tweet is in bad taste and shows Indians in a bad light.

You are not a True Sportsman.
You are a Communal Person

I hope @bcci takes action against
You for your Communal Tweet and stops yours Pension .

Sir, now I Understand what is the Similarity between You and Sunday School??

Don't spread the hate. We were the one for thousands of years barring the last 71+ years. The subcontinent shares the same blood. Ours success theirs too. Even @isro sent it for the betterment of humanity not just india. We carrying @NASA equipments too for the research.