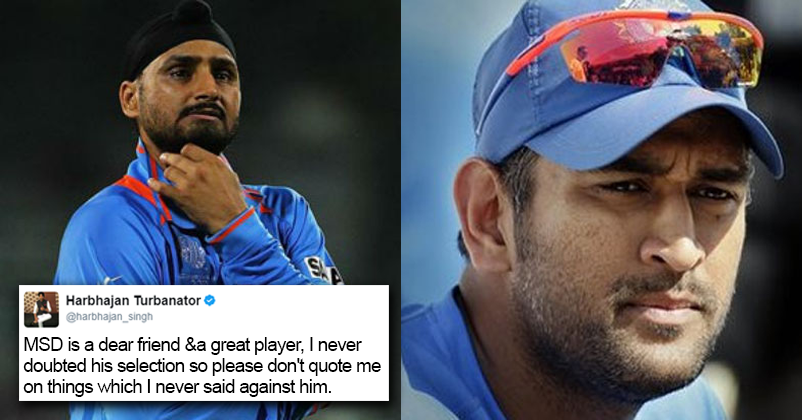 Veteran off-spinner Harbhajan Singh, was the centre of media attention after his interview with NDTV; numerous media sites covered this in written form and some gave their own verdict about Bhajji’s quotes. Different reports in the media suggested that Harbhajan had quoted Dhoni to be a privileged player. This incident made many people furious and they made their own assumptions on the issue.

After the incident, he came forward to clear up things for people and also claimed that media is making up false stories about him just for their own publicity. Apparently, his indications were in relation to the fact that Dhoni got more opportunities, despite not being in the best of the forms at all times.

He cleared it up with three tweets and also shared the video interview with NDTV; Bhajji asked the media to watch it before misquoting him.

His first tweet requested the media to not misquote him all the time.

1/3 Dear media plz don't misquote all the time. Any1 who wants 2know what exactly I said in that interview please go & see the entire video. pic.twitter.com/aatVC4wxzM

1/3 Dear media plz don’t misquote all the time. Any1 who wants 2know what exactly I said in that interview please go & see the entire video.

Whatever he said in the video, we wrote it as it is yesterday:

Yes there is no doubt that MS Dhoni brings a lot to the table apart from his batting, whether he is in form or not. Obviously, we have seen that he is not hitting the ball as well as we have seen.
But he has been captain and he understands the game and having him in the middle will help a lot of youngsters and people out there who are not feeling great in particular moments. So he has that edge. But when it comes to me. I do feel that we are not given that sort of privilege, We too have played for 19 years and won and lost India matches. I have won two World Cups too. So this privilege is for some players, and for some, it is not and I’m one of those for whom this privilege is not there. I don’t know why that is the case. That question of ‘why’, needs to be asked to the selectors.

This is what we posted yesterday. Although we mentioned the exact text version of what he said, we should have posted the video with it, because the tone of speech makes a lot of difference; it is because of this very difference that people interpreted his quotes in a wrong manner. While speaking during the interview he was very calm and composed. If you watch the video you will understand.

In his next tweet, he wrote that Dhoni is a very good friend of him. He never doubted the credibility of Dhoni as a player and never said anything against him.

2/3 MSD is a dear friend &a great player, I never doubted his selection so please don't quote me on things which I never said against him

“2/3 MSD is a dear friend &a great player, I never doubted his selection so please don’t quote me on things which I never said against him,”

In his third and last tweet, he said that the media is misquoting him only to get clicks; he further requests the media to not hurt others for their own benefit.

3/3 just to run ur sites n create 'sensatiinonal stories' don't misquote & run out of context to harm someone elses image.

3/3 just to run ur sites n create ‘sensatiinonal stories’ don’t misquote & run out of context to harm someone elses image.

Well, what he said is true. No one should make an assumption without knowing the whole story. People might slam us for covering the story yesterday, but we wrote exactly the same words he said. Not posting the video was a mistake. We never post fake stories or make an assumption. But we all must have realized now how words and video can make a lot of difference. It was interviewer who was leading the interview and Harbhajan was just following him. So blaming Harbhajan for it is not at all justified. His tone tells us everything!

We strongly recommend you to watch the video to see under what circumstances he quoted his words in the interview.

Sachin Trolled On Twitter For Promoting His Biopic! Why, Just Because He Isn’t A Bollywood Star?
Twitter User Told Mitch To Stay Away From Muslims! The Cricketer Blasted At Him With Strong Tweets!