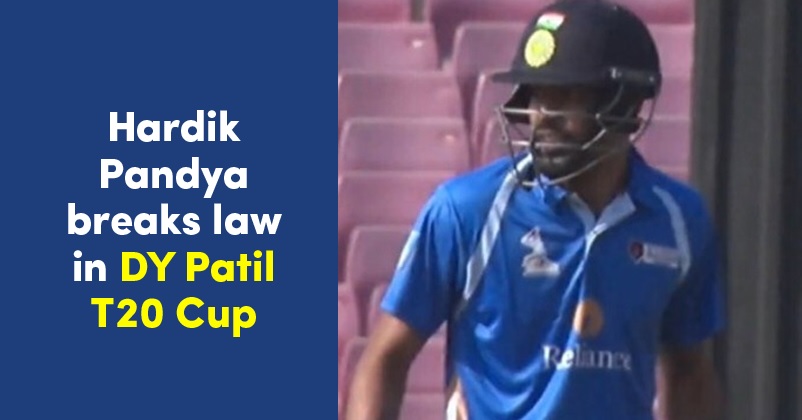 Indian cricketer Hardik Pandya was out of the cricketing circuits for almost 5 months due to a back injury which he got in a match against South Africa in September last year. In October, he had a surgery and it seems that he has recovered completely as he has made a comeback on the cricketing field in the DY Patil T20 Cup. He scored 38 runs (25) for the Reliance 1 team and also picked up three wickets.

However, his comeback has also started a controversy as he was wearing the Team India helmet which is the violation of a code. In 2014, the Board of Cricket for Control in India (BCCI) instructed the match referees to ensure that the national cricketers should not sport the logo of BCCI while they are participating in any domestic cricket tournament.

As per an official, this rule has been enacted since the start of the season but it has been implemented seriously during the Deodhar Trophy which was played between West Zone and East Zone and concluded in recent times. Nevertheless, the cricketer didn’t follow the rule and now he may face the consequences of violating the code.

Chief National selector MSK Prasad also watched Hardik Pandya’s performance and he was pretty happy with it. India will need Hardik in the team for the ICC T20I World Cup 2020 which will be played in Australia this year.

Hardik’s fitness has been a concern for the Indian team management as he is being observed closely by them, especially after he didn’t turn up to play for India “A” against New Zealand “A” before the India’s tour of New Zealand.

Hardik is a member of the IPL team Mumbai Indians (MI) and the MI support staff, which includes the former Indian cricketers such as Robin Singh, Zaheer Khan, Pravin Amre and Kiran More, is also keeping a close eye on Hardik’s fitness.

If everything goes well, Hardik will be playing in the IPL opener on March 29 which will be played between Mumbai Indians and Chennai Super Kings (CSK).

Twitter All Praises For Ravindra Jadeja For His Stunning Catch Of Neil Wagner In IndVsNZ
Virat Kohli Forgets “Nice Guys” Comment, Acts Aggressively After Kane Williamson Got Out