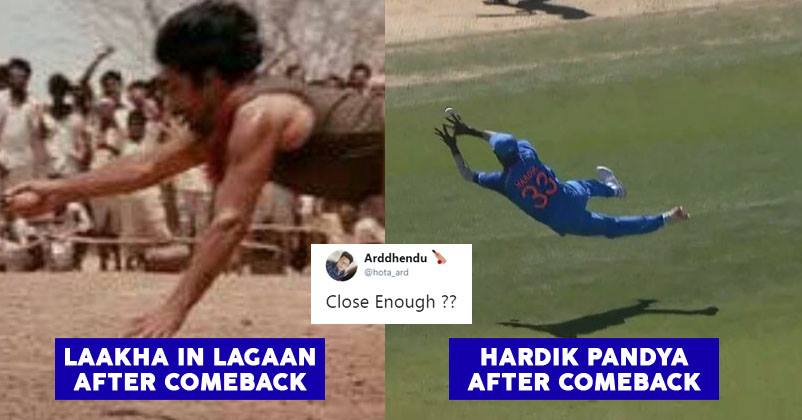 After the controversy caused by the infamous talk show Koffee with Karan, hosted by Bollywood filmmaker Karan Johar, Indian players Hardik Pandya and KL Rahul found themselves in grave trouble.

They made some comments, which were simply misogynistic and sexist and angered people all over. This prompted the BCCI to suspend these two players indefinitely.

But, after many discussions, decision was made to let off the ban, and so with immediate effect they returned to the team. Though Rahul will play for India A.

Hardik directly joined the national team in New Zealand where they are playing the five match ODI. Pandya replaced Dhoni and made a stunning comeback by dismissing Kane Williamson through a diving catch.

Every one was thrilled to see Pandya performing so well in his comeback match. Netizens praised him a lot. Check it out.

Lets put everything aside for now. Welcome back @hardikpandya7 with a great catch and tight bowling! #INDvNZ #BCCI

Just up now
Hardik in finally
5 overs for just 9 runs and a very good catch,going by CB
The kind of comeback he needed to make people realize the worth he has as a LOI player#NZvIND

Hardik Pandya is so similar to 'Laakha' from Lagaan who returns to play after messing up badly and wins hearts with a stunning catch to dismiss an important batsman. 😅#NZvIND #TeamIndia

Here's a look at that superb catch from Hardik Pandya. Full stretch dive, went with both hands. Great display of athleticism. pic.twitter.com/N6ccz2rds3

Hardik Pandya is bowling so well.

This performance deserves a Hamper. #NZvIND

That was a fielder’s wicket, absolutely stunning catch from Hardik Pandya. #NZvInd

Remember Laakha From Lagaan
Pandya Did The Same Thing
Missed Matches
Came Back And Then Won Hearts Again❤️❤️#IndVsAus pic.twitter.com/CQCwOVmPtg

So, what do you think?