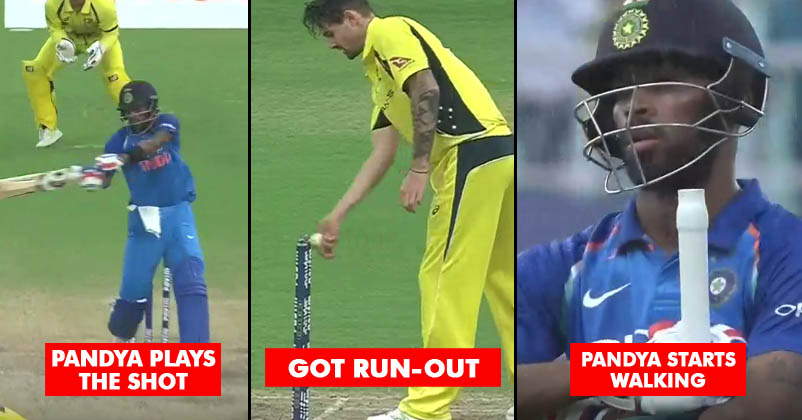 We all are excited about the 5 match ODI between India-Australia. In today’s match at Eden Gardens, there were many Goosebump moments but at the same time, there was a weird moment that took place in the 48th over of the match. As you all know, India won the toss and elected to bat; little did we know that we would get to witness a surprising moment while Pandya was on strike.

If you have watched the match closely, you must be knowing what we are talking about but if you haven’t, you need to know that Pandya was run-out in the 48th over but still, he wasn’t given out.

Wondering why this happened? Let us explain you in detail.

Well, Pandya was on strike and the bowler on the other side was Richardson, who delivered a waist height full toss, which was a no ball. Steve Smith took a brilliant catch and Pandya, who was under the impression that he’s out, left the crease. Taking advantage of this situation, Smith hit the stumps, thereby leading to a run-out for Pandya. It is technically right to give a run-out on a no-ball. But still, umpire declared that Pandya is not-out. Why? Here’s the explanation.

Read the law which declared Pandya as not-out!

27.7. Batsman leaving his wicket under a misapprehension

An umpire shall intervene if satisfied that a batsman, not having been given out, has left his wicket under a misapprehension that he is out. The umpire intervening shall call and signal Dead ball to prevent any further action by the fielding side and shall recall the batsman.

So, as per the law, Pandya was not given out because he left the crease under the misapprehension that he was out.

In case you are wondering what exactly happened then Click here to watch the video of Pandya run out on BCCI website.

Not many people must be aware of this law; this is why, there were many reactions on Twitter. Check it out…

Comedy of errors at Eden Gardens. Whatever the case, Pandya should have completed the run. Smith showed better presence.

Rule 27.7: If a batter mistakenly walks off thinking he's out & a fielder then tries 2 get him out, the ball will b DEAD. Pandya is not out

So now, did you come to know why Pandya was given a not-out? Please share this with cricket freaks who feel that the umpire was wrong.

Dhoni Showed His Shooting Skills Before 2nd ODI Against Australia & We Can’t Be More Impressed
This Video Of Triple H Proves That WWE Is Purely Fake! Watch & Decide Yourself