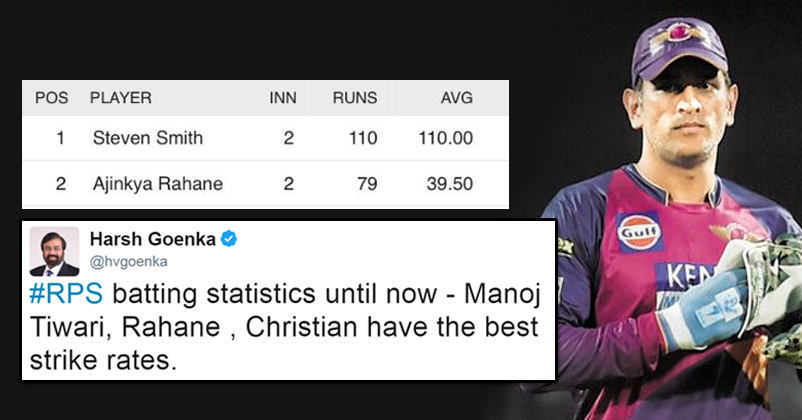 Harsh Goenka, brother of Sanjeev Goenka (Owner of Rising Pune Supergiant), had already faced the wrath for calling Steve Smith better than Dhoni. Twitter users had thrashed him left and right, but it seems, he’s not ready to learn from his mistakes. Once again, Harsh Goenka took an indirect dig at Dhoni with just 1 tweet. This time he highlighted the statistics of RPS’ batsmen and mentioned names of cricketers with best strike rates. Goenka shared a chart too;

Check out the chart which he shared;

Dhoni, who had a strike rate of 73.91 occupied the 4th position. Surprisingly, Goenka mentioned Daniel Christian’s name, who was placed below Dhoni. In fact, he has played just 1 match and scored only 17 runs. In spite of this, Goenka praised Christian and indirectly trolled Dhoni for his poor batting.

Dhoni’s fans couldn’t tolerate this tweet and got furious at him. Check out their tweets…

Talk on his face!

He’s not a robot!

Ms dhoni is a man..he is not robot..that he will hit run in every match..yu dnt know abt cricket..we didnt want to see in the nxt ipl#goenka

Look at these stats!

Fool look at this stat of @msdhoni pic.twitter.com/BMsGbXh3Pd

Clearly proves your mediocre knowledge in cricket. If you wanna settle something out with MSD, don't be a coward. Be a man and talk to him

Everyone is watching it for Dhoni!

You don’t deserve him!

U don't deserve him. Better shut up and wait for 2018..make him sit and see your fan count. Not a pune resident here(from kolkata)

Dhoni is a hero!

Dhoni was hero …Is hero….And will be hero….. Nobody can erase his achievements…

What do you have to say about this troll? Share your views in our comments section below.