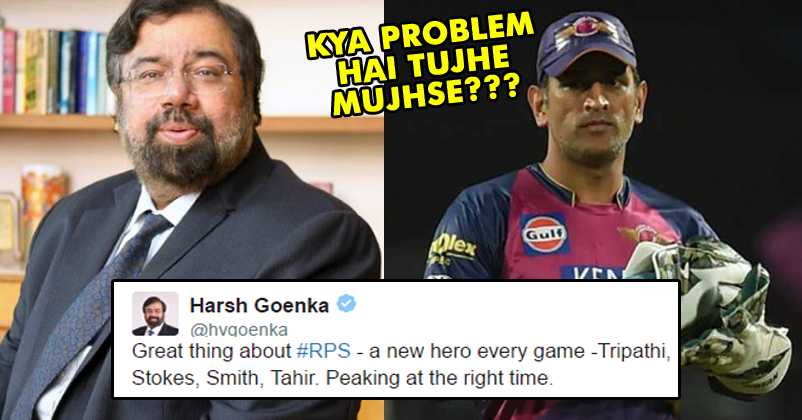 Harsh Goenka, the brother of Sanjeev Goenka (RPS team owner) had already faced a lot of backlash from Dhoni’s fans for taking a dig at him and passing unfavorable remarks. In fact, he had called Smith Better than Dhoni in his tweet; Mahi fans considered this as an insult and trolled him so hard that he had to appreciate him in his next tweet i.e. when he gave a wonderful performance against SRH.

Harsh had no option but to praise Dhoni for his last ball finish. He still got it back from social media users because they considered it to be a show-off and nothing else. This U-turn didn’t go down well with many, due to which Goenka had to bear the brunt again. This was not it; yesterday, Goenka’s Twitter handle displayed one more tweet in which he took an indirect dig at Dhoni; Goenka royally ignored him and this sparked off a controversy on Twitter.

Rahul Tripathi displayed a brilliant performance and scored 93 off 52 balls in the match against KKR; everyone loved the way he played and so, even Harsh Goenka thought to appreciate him on Twitter. He listed the names of heroes of RPS but omitted out Dhoni’s name deliberately.

It read, “Great thing about #RPS – a new hero every game -Tripathi, Stokes, Smith, Tahir. Peaking at the right time.”

This post irked Dhoni’s fans and they were in no mood to forgive Goenka. Check out how angry they are;

What about SRH match you fool….Don't forget the value of who changed your life….today you are here just because of @msdhoni in your team

Ya because we have Father of heroes in our team #msdhoni

You are very conscious "Not to Use MSD's name anywhere". Wait n watch. He wl bring t cup for ur team & put fullstop for all n leave #CSKMSD

Thank God this will be your last IPL….

Your #RPS is Zero 0 without Dhoni ! We people are supporting jst beacuse of MSD!

Do you have any message for Harsh Goenka? Share it with us in our comments section below.

Indian Cricket Team’s New Jersey Is Unveiled And How Much It Cost The Sponsors Will Give You A Shock
Most WTF Moment Of IPL 10! Girl Offered Apples To Umpire Instead Of Ball!