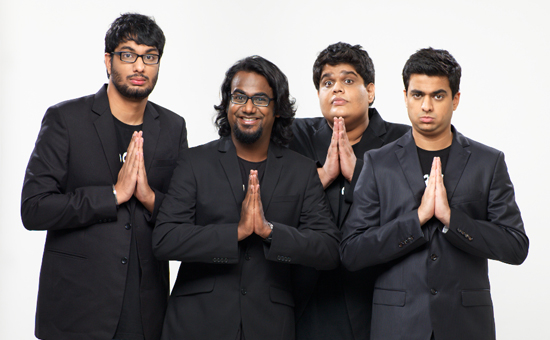 The favorite Comedian group of India, known majorly for their Non-Desi jokes and (who can forget the roast) seem have taken the easy path for fame and power. Alas!!! these short-cuts lure men into what-not!

The poster of them appealing to public is all over Mumbai. But hey don’t be surprised, our beloved Roasters are not that corrupt that they will scam their fans. The Neta Looking posters are just a show of their wit, and of course the promotion gimmick for their upcoming show in Star Plus & Hot Star – ON AIR WITH AIB.

If it was actually for a real political promotion. Shaakya you would have lost with that *FACE* – “Sorry but that’s true” At first when I saw the posters it seemed like a Bhajan Mandali group but never mind. By far the most creative way to promote a television series. After all it is ALL INDIA BAKCHOD! So, ain’t everybody excited to see what Shudh Comedy they are up to? How can the men who could have torn the poster and get pixel-ate picture,(Thanks to Photoshop people for saving him) be left behind to show this off? 10 Crazy Facts About Japan Which Will Make You Want To Go There!
10 Bollywood Hunks And Their Pets