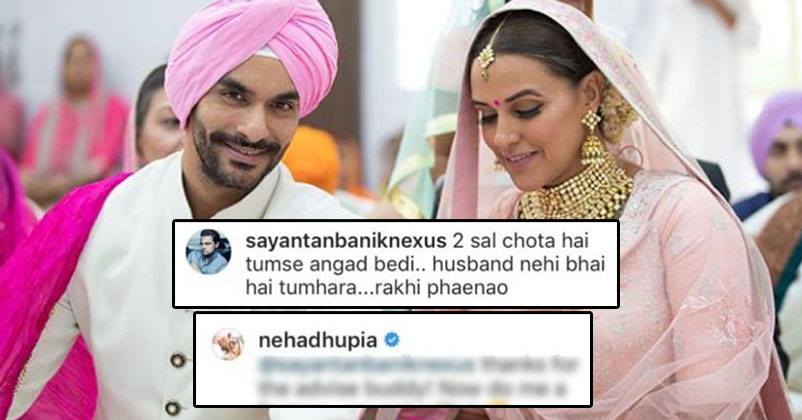 Bollywood actress Neha Dhupia surprised her fans and the whole nation by suddenly announcing her marriage. Yes, while the nation couldn’t get over with the extravagant big fat wedding of Sonam Kapoor and Anand Ahuja, the news of Neha Dhupia’s wedding came as a happy surprise for fans. 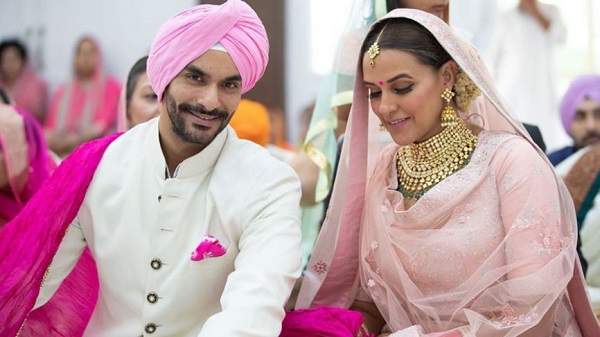 The actress tied knot with Angad Bedi who is also an actor by profession. It was a private ceremony that took place in Delhi in presence of family members and close friends. While the couple is on cloud nine, there are some people who can’t see anyone happy and try to poke their nose into just everything, no matter whether their suggestion is required or not!

One such hater made an attempt of trolling Neha when she shared the character poster of her husband Angad Bedi’s upcoming movie “Soorma”.

“A person with a heart of gold – meet Bikramjeet Singh aka Bikram in #Soorma, releasing on 13th July!

A troller didn’t spare even Instagram and with an intention of spreading filth, he commented,

“2 sal chota hai tumse Angad Bedi.. husband nehi bhai hai tumhara… rakhi pehnao” (Angad Bedi is two years younger to you.. He’s not your husband but your brother and you should tie Rakhi on his hand)

Well, Neha is not someone who can bear the brunt of trolling silently. On the contrary, she is among those people who speak their minds and call a spade a spade. She gave the coolest reply to the troller, proving that there’s no place of hatred in her life and she doesn’t give a damn to such people who unnecessarily mock others.

“Thanks for the advise buddy! Now do me a favour… go get a life!”

Could there be a better reply? Certainly not! You won it Neha!

Talking about “Soorma”, it’s the biopic of Sandeep Singh, a hockey player, and the titular role is played by Diljit Dosanjh whereas Angad will portray the character of Bikramjeet Singh, his mentor and brother.

Fan Missed His Date To See Dhoni Playing Cricket. CSK Made A Funny Tweet & Twitter Cracked Up
Twitter Is Slamming & Trolling BJP After Their Defeat In Karnataka Floor Test