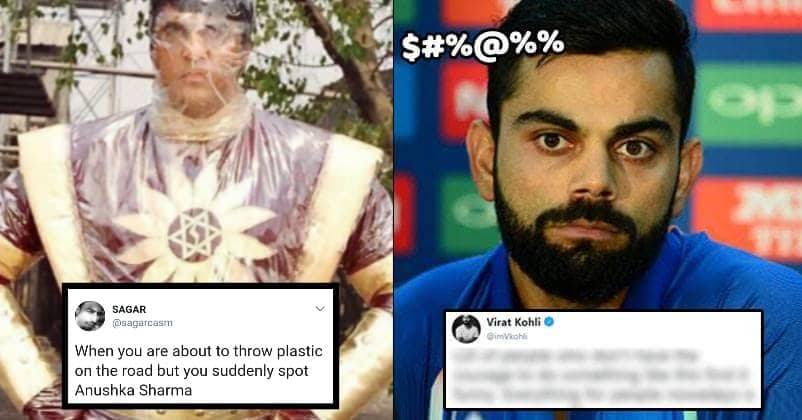 Virat Kohli and Anushka Sharma have always been straight-forward when it comes to speaking their hearts out and don’t believe in mincing words.

Recently, Virat took to the micro-blogging site Twitter and shared a video in which a man who was sitting in a luxurious car was seen throwing plastic garbage on road. Anushka couldn’t tolerate it and tried to school the man by saying,

“Why are you throwing plastic on the road? Please be careful, you can’t throw plastic like this on the road.”

Kohli shared the video with caption, “Saw these people throwing garbage on the road & pulled them up rightfully. Travelling in a luxury car and brains gone for a toss. These people will keep our country clean? Yeah right! If you see something wrong happening like this, do the same & spread awareness. @AnushkaSharma”

Saw these people throwing garbage on the road & pulled them up rightfully. Travelling in a luxury car and brains gone for a toss. These people will keep our country clean? Yeah right! If you see something wrong happening like this, do the same & spread awareness. @AnushkaSharma pic.twitter.com/p8flrmcnba

It was definitely a commendable act on the part of Anushka as she tried to make the environment clean and the couple received accolades on Twitter for this.

However, there were few users who called it a cheap publicity stunt and questioned recording the video of the act just at the right moment. Some others applauded the couple but at the same time asked them not to defame the man by sharing the video publicly and instead make such people understand in a better way while several others found Anushka’s language harsh and suggested that she could have schooled the guy in a humble way.

Check out some selected trolls:

Too much of cheap publicity. Not sure if anybody ll b inspired aft watching this video but sure people talk abt them and this want they both wanted and it's all preplanned so SF to make it viral. Great Pub lie city ……

Why are you recording your wife’s heroics and publishing it in social media??.. is this the first time you saw someone threw a plastic cover from a car?? If your intention was to advice him, first be friendly instead of being bossy.. this kinda attention seeking is so cheap😬

Cheap and crass level language by Anushka Sharma. And who recorded this video? Cheap publicity stunt.

If you do something which is routine & normal , need not to be shared on Twitter for appreciation and attention from public . Keep guiding others for incorrect behaviour and keep it to your self. Avoid social hypocrisy.

Traveling in a luxury car N @AnushkaSharma mouth turned into a garbage. How can u shout at a person just like that? Before teaching someone about cleanliness, pls u learn how to talk with common ppl.. If this had happened in a different way, it would be appreciated… @imVkohli

When you are about to throw plastic on the road but you suddenly spot Anushka Sharma pic.twitter.com/IQDUuGHKHO

Kohli slammed the trollers in harsh words in another tweet and wrote, “Lot of people who don’t have the courage to do something like this find it funny. Everything for people nowadays is meme content. Shame.”

Lot of people who don't have the courage to do something like this find it funny. Everything for people nowadays is meme content. Shame.

How did you find Kohli’s reply? What do you have to say about the whole episode? Let us know.