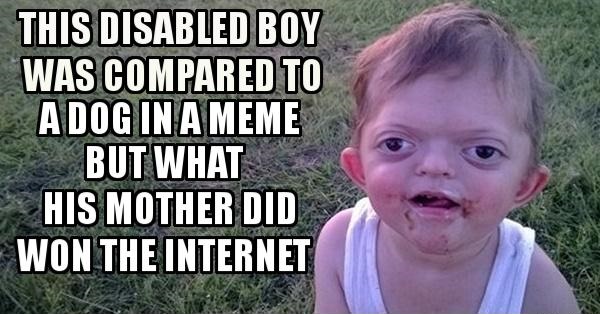 There is no denying the fact that mothers can do anything for their kids and Alice Ann Mayer is a great example of it. She got devastated when she saw that someone has picked her son’s photo from her blog and made a meme in which her son Jameson has been compared to a pug.

4-yr Jameson is suffering from a genetic disorder which is known as Pfeiffer syndrome and it results in facial abnormalities. When Alice came to know about this Internet troll, the photo already got nearly 5,000 likes and was shared almost 3,000 times but she decided to fight against this insensitive act of some pathetic human being. She made nearly 100 reports after which the photo was removed by Facebook, Twitter, Instagram and other social networking websites.

Alice asked people to help her in her fight, “If you see this face somewhere it doesn’t belong, or if you see that meme, screenshot it and send it to me. Please do not share the meme. The screenshot also provides me with proof. You can also report it, as many times as you want. Unfortunately, that’s really about it for now. Once something is out there it’s there. Nonetheless, I refuse not to fight. It is absurd to me that it will ever be OK to target children to degrade and humiliate them.” As written by her in blog, “That sweet picture has resurfaced and is circulating around the internet. Except, that the photo has been altered. Someone, somewhere, decided for who knows what reason, to take that picture and create a meme comparing my son to a pug.”

She added, “What compels a person to do such a thing I will never understand. There is no way for me to know who did this, but for every post and share of this meme I will do everything in my power to get it taken down.”

She was thankful for huge support from people, “First, I have to say thank you. Thank you from the very bottom of my heart to every person that has stood up for Jameson.”

Alice continued, “The outpouring of love and support has been overwhelming. I appreciate each and every one of you that has commented, reported, and reached out to us.”

“I can’t put into words what it means to know you are taking your personal time to fight for Jameson. If you see this meme, please let me know. You can report the post, but if you send me a link I can file a claim for copyright violation,” the mother wrote further.

Click here to read her full message to the trolls.

Let us make sure to support Alice in her fight so that this type of disgusting act does not happen again.

What Urvashi Rautela Did To Replace Anushka Sharma In Salman’s “Sultan” Will Shock You
GHAYAL ONCE AGAIN – First Day Collections Are Out! It’s Worth Your Money & Time