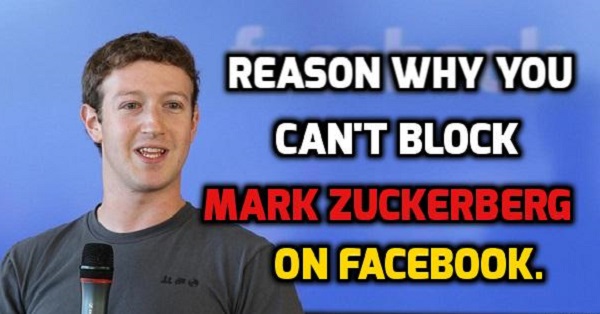 There have been many facts about Facebook including the following fact which always tops the list that, Mark Zuckerbeg, Founder & CEO of Facebook Inc can’t be blocked on Facebook. Yes it is true that Mark Zuckerberg has not been blocked over the years right from the 2004 the year in which Facebook was started. However Mark Zuckerberg’s profile shows up the option to block his profile.

When you click the block option the following message pops up.

It means that, if a single account is blocked by a large number of people in a short interval of time then the safeguard will kick in and will also prevent any furthur blocks from the users to the same account , just in case to prevent the user from Trollesters and the corresponding viral campaign. Simply Facebooks acts as the automatic block blocker to prevent from more blocks.

After all Mark Zuckerberg who is one of the popular accounts on Facebook with over 40 Million followers. A lot people are trying constantly to block him on Facebook. The same safeguard is applied to Mark Zuckerberg’s account making it unable to block anymore.