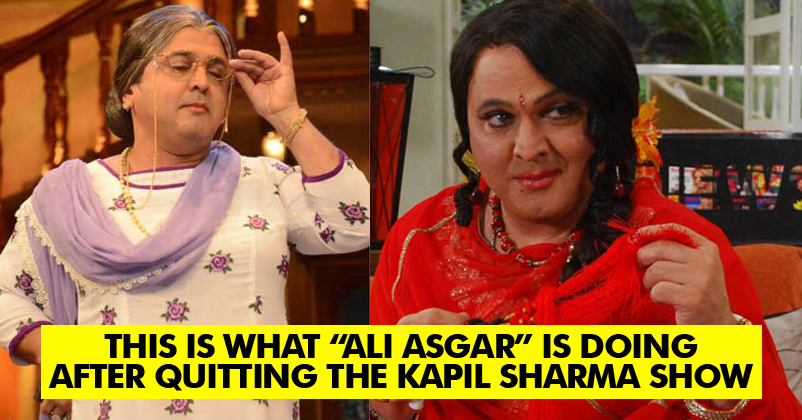 Ali Asgar, our favorite Daadi from The Kapil Sharma Show has already made a move. As we all know the infamous fight between Kapil Sharma and Sunil Grover in the flight has taken ugly turns, the entire cast of the show is falling apart. The Bollywood celebs are now not willing to promote their movie on the show for obvious reasons. Though Navjot Singh Sidhu, Preeti Simoes, Kiku Sharda and Sumona are still a part of the show, Sunil Grover, Ali Asgar and Chandan Prabhakar have reportedly ‘called it quits’.

The makers are trying their best to convince them not to leave the show but looks like there’s no positive sign.

Ali Asgar, who has been appreciated for his various avatars on TKSS has already moved on and signed his next show.

The show is airing on SAB channel with Aishwarya Sakhuja as the lead actress.

The show is called Trideviyaan, where Ali Asgar will enter as a tribal woman. He will be actually a criminal in disguise. Well, the character surely seems to be interesting but we will miss our favorite Daadi on the Kapil Sharma Show. We just hope that things fall into places and once again we see the whole team come back together.

Someone Filed Petition Against Phillauri To Stop Its Release, Gets Fined With Rs 5 Lakhs Instead
Bharti Singh Is Highest Paid Contestant On Nach Baliye 8, Check Out How Much Others Are Charging