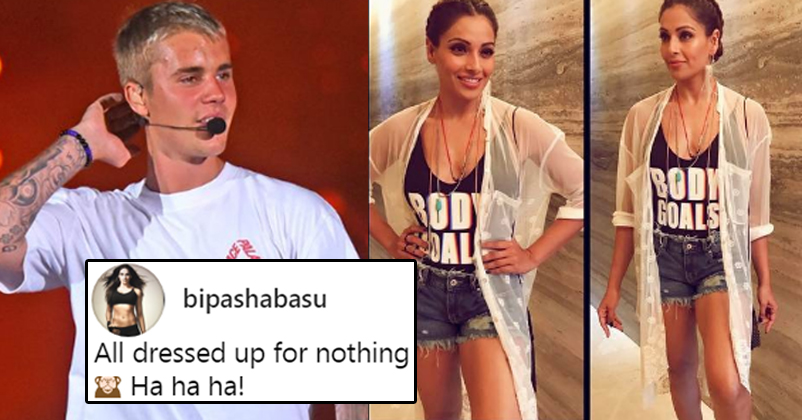 Justin Bieber’s first visit to India for his Purpose Concert was a much-awaited scene. Not just fans or media, but Bollywood stars were also excited for International singing sensation’s visit.

However, the show was not up to the big expectations and led to the disappointment of many. Media was already outraged by the behaviour of management towards them, even Bollywood stars were not happy with the security arrangements and openly showed their feelings.

Bipasha Basu and Karan Singh Grover gave a blink and miss appearance at the concert. They came and disappeared in just 5 mins following the unsatisfactory security. Bipasha who was all dressed up in the black printed top paired with shorts, posted on her Instagram regarding the same-

All dressed up for nothing🙈 Ha ha ha!

All dressed up for nothing? Ha ha ha!

So what we could not enjoy at the concert… still it's always fun with you my love. Thank you 😍

So what we could not enjoy at the concert… still it’s always fun with you my love. Thank you ? Disappointed with the performance of Bieber, sarcastic Armaan Malik posted-

Expected much more than what was given to us! Really #disappointed

Expected much more than what was given to us! Really #disappointed

Then there was Arjun Rampal who attended the concert with his daughters Mahikaa and Myra. Disappointed with the security, Arjun also left the concert in between.

According to a report on Spotboye.com, Arjun who was accompanied by daughters Mahikaa and Myra was speaking to media persons at the event. While he was talking to the media, a few photographers tried zooming to his daughters to click their picture.

This disturbed him and he immediately walked out of the venue along with his daughters. The report also reveals that the actor later did not step back to the concert after seeing a huge crowd falling on each other.

Even Sonali Bendre who was there with her son called the concert a waste of time.

So, it seems all the hype was not worth it. Neither the audience nor stars enjoyed the much awaited night to their fullest.

Twitter Cracked Up Some Hilarious Jokes On Arjun Tendulkar & Justin Bieber! Check Them Out!
Even Though You Are Angry With Bieber, You’ll Respect Him After Knowing What He Did Before Concert