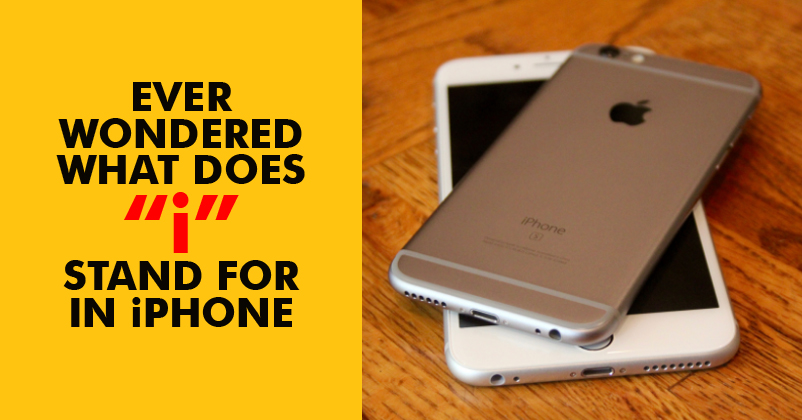 Apple Inc was founded on 1st April 1976, by Steve Jobs, Steve Wozniak and Ronald Wayne in Cupertino, California. It is the world’s leading company which sells and develops consumer electronics, computer software. Some of its popular products are Mac, iPod, iPhone, iPad, Apple Watch, Apple TV. Apple is the world’s second largest mobile phone manufacturer. iPhone is one of it’s most popular products which was launched in 2007 by Steve Jobs at the Macworld Conference & Expo. So to all those Apple users, have you ever wondered what does ‘i’ in your iPhone or iPad mean? If by any chance you think that the ‘i’ in the Apple products stands for the person who owns it, then here’s the reaction from Steve Jobs. 😛 Here’s the actual meaning of ‘i’:

Introduced in 1998, iMac was the first Apple product which started with ‘i’. During the product launch of iMac, Steve Jobs told that ‘i’ stands for the Internet. Those were the early days of the Internet and iMac was aimed to provide faster access to the Internet. In his exact words, Jobs said: “iMac comes from the marriage of the excitement of the Internet with the simplicity of Macintosh”. He continued to explain with a slide that ‘i’ also stands for the internet, individual, instruct, inform, inspire. 15 Interesting Things You Can Do With Facebook Messenger.!!
SHOCKING ! Your WhatsApp Chats Are Never Deleted Even If You Erase Them Manually