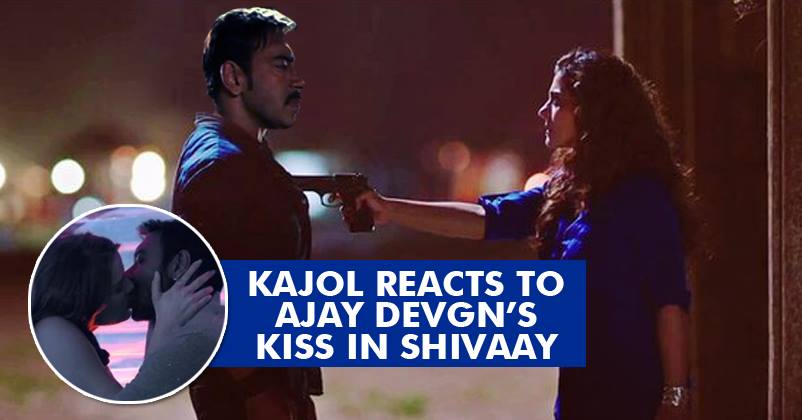 Finally the Ajay Devgn starrer ‘Shivaay’ has hit the big screens and is having a bad time clashing with ‘ADHM’! It is sad to see that in spite of being such a wonderful movie, it isn’t getting a good response from the audience. Everything right from the storyline, acting and locations have been ‘PERFECT’, then too the movie has proved to be unlucky. One more major highlight of the movie is Ajay Devgn’s steamy hot scenes with Polish actress Erika Kaar. Finally Ajay has broken his no-kiss policy in ‘Shivaay’ and has got intimate with the actress. Yes, this is the 1st time that the actor has kissed on the big screen, I am sure you must have enjoyed these sizzling sequences. But wait, did Kajol enjoy it too? We don’t think so…

She isn’t quite happy on her hubby getting intimate with another actress on the big screen; this was obviously expected! This was revealed by Kajol herself when she had come with her hubby on The Kapil Sharma Show for the promotions of ‘Shivaay’. Kajol revealed that Ajay hadn’t informed her about these kissing scenes earlier.

It was only after the shooting was over, that Kajol came to know about this & we all can expect how she must have reacted; she was totally ANNOYED. However, we all know that they are indeed a cute couple; so when his wife got angry, Ajay apologized to her and left no stones unturned to make her happy.

When Kapil asked her about this,Kajol laughed and said that she indeed felt like shooting Ajay with that Dilwale gun just like she did to SRK in the movie, LOL. She said “Wo Dilwale ki gun yaad hai? Wo nikalne ka mann kar raha tha”. Obviously, all this was said in a very humorous way, but it can be clearly seen that the actress is too possessive and wasn’t happy about her man kissing Erika.

Ajay ji, be careful next time! Think twice before you finalize the script!

So guys what do you have to say about this? Do share your views in our comments section below.

Day 3 Collections Of Shivaay & ADHM Are Out! Never Expected Such A Weekend!
Akshay Kumar & Twinkle Khanna Get Emotional! Reason Will Bring Tears To Your Eyes Too