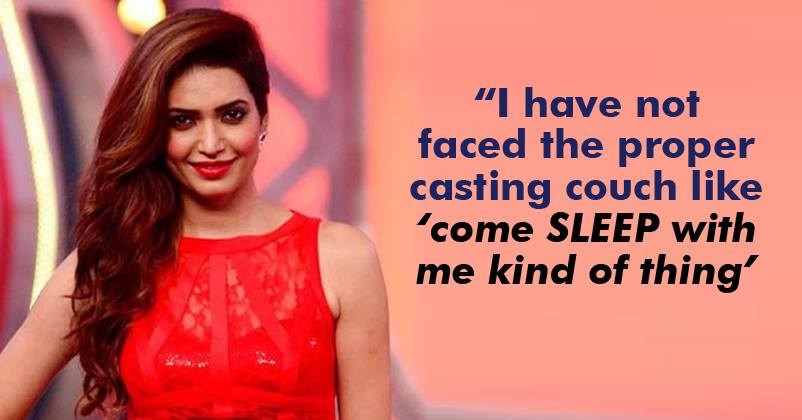 Little did we know after her debut in the popular TV saga ‘Kyunki Saas Bhi Kabhi Bahu Thi’ that the chirpy bubbly character will turn this sensational and beautiful? There is no doubt that Karishma Tanna won hearts will her performance. Later on, she went on to become a big name in TV industry, both technically and literally. Yes, her height is a 5’9 inch, which makes her really a tall actress as per television standard. But taking into account the fact that she is pretty and tall, which is the undeclared compulsory criteria to make it big in Bollywood. What actually went wrong for her? She told this in her recent interview:-

“I have not faced the proper casting couch like ‘come sleep with me kind of thing’. If people have hinted also I have not given that hint back. Maybe things would have been different if I would have. But I never believed in that, if I have the talent and face then the director will take me in the film. Forget about the director even if you are speaking to someone, people flirt and give hints and it’s up to you how you want to take it forward. I never encouraged that kind of things probably that’s why I am still here.”

Well, we all wanted to see more of her on the big screen, after all, she is a delight on screen. Be it her TV outing, reality shows or ramp walks, she has always graced the screen. So when asked if she regrets not making it big in Bollywood, she was quick to say.

“When people say that and compliment and I do feel that I have all the qualities of a film star but then why have I not made it that big? I blame it on my destiny may be. I was not there at the right place, at the right time.

I do feel bad but my mom always says that you see people who are below you then you will feel better. I did give auditions to big banner films from Yash Raj to Dharma; if I had to click, someone would have spotted me and taken me in their films. If that has not happened that means I am meant to be on television. And I don’t regret being on television but I just regret that I deserve being in films and that didn’t happen.

I don’t look down on TV and today whatever I am is because of television. It’s just that everybody wants to move a little forward in life that didn’t happen in my life. If people call me for films auditions I will never stop going, I will try until the end.”

It’s really a waste of a talent like this? Isn’t it!

We so badly want to see more of her on screen! A Shout out to all the Karishma Tanna fans!

So, how many of you are her fans or adore her beauty?

Divyanka & Vivek Are Enjoying Their Mini-Honeymoon In Udaipur! Their Pics Are Too Tempting !
Hrithik Has Stopped Coming For Kaabil’s Shooting! His Dad Is Losing 12 Lakhs Per Day!