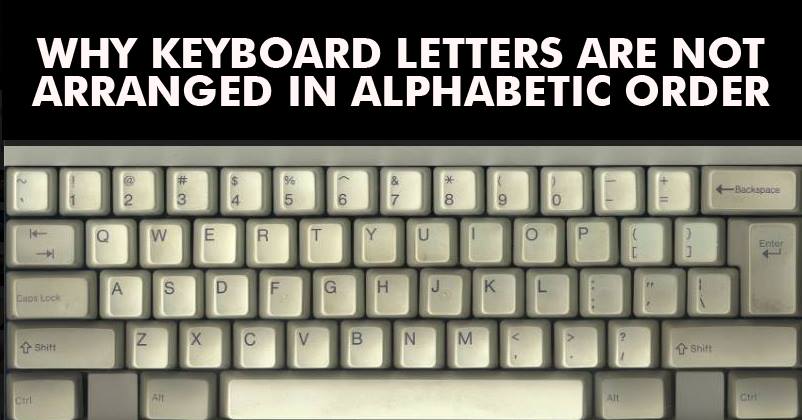 I am kid from 90’s and my first encounter with my Pentium 3 Computer was way back when I was just 8 or 9. Back then, the only thing that I knew was ‘CPU IS THE BRAIN OF COMPUTER’ which is still today the most relevant and authentic knowledge that hasn’t been changed since then. The most brutal and confusing thing about computer back then when I was a child was to locate the letters even if I had to type my name.

Just admit it that we all went through that feeling of confusion where we had no idea about the letter that we should press next. We had always wondered about why the makers of computer didn’t put this in a much simpler way for laying down the keyboard letters in alphabetical order. Why did they complicated things just for the sake of phrase ‘Computers Are Simple Yet Complicated’.

Okay, so at first I would like to tell you that YES, there was indeed such a kind of a layout for typing at the initial stage. Have a look It was quite easy to learn and type at great speed, but problems arose because of the same reasons. People were typing at great speed which led to the mechanical jamming of buttons. Damn ! ! Too fast for its own good.

Now this jamming won’t really sound like a problem for many of us since we never had the misfortune to use a typical TYPEWRITER. But if you ask this to typewriter, he or she would tell you the misery through which they go while working on a jammed typewriter. Even if there just a single jam on one button, this would require unjamming the keys, ripping out the old papers, then washing the ink off your fingers, inserting new sheets, and starting all over again. Now the form of arrangement that we are using today is known as ‘QWERTY’. The QWERTY layout was devised and created in the early 1870s by Christopher Latham Sholes, a newspaper editor and printer who lived in Milwaukee. Now as a kid I used to believe that QWERTY layout was designed so as to slow us down while we type, but in actual it helped us to type faster without jamming our keys. Apart from the problem of jamming, keys being farther apart increases our typing speed on its own, because it helps in alternation between the hands. We all know that almost every word in the English language has at least one vowel letter, but on the QWERTY keyboard only the vowel alphabet “A” is located on the home row, which requires the typist’s fingers to leave the home row for most of the words.

Now if we look technically, here are the most popular and used letters in English writing.

Now if we look at the anatomy of human body, particularly our fingers, we find that our index finger and middle finger have more strength as compared to rest of the fingers and thumb. Okay THUMB can be strong but it is broad, hence you don’t want to end up tapping on two words while typing, RIGHT ?

So the catch is since index finger and middle finger have greater strength and flexibility of moving fast, letters like ‘E,T.O,I,S,F,N’ etc. are closer to the centre and top portion of the keyboard. But our little and ring fingers are not that much flexible for fast movement, so the least used letters like ‘Q,X,Z,J,K,B,V,W,P,Y ‘ are placed either at extreme ends or at lower positions.

So here were some few reasons of inventing a keyboard layout which was once considered as a complete disaster for us. Fun fact, as a gesture of respect for the work that out typewriters do, the maker of QWERTY gave them a fantastic tribute by putting all the letters of the word ‘TYPEWRITER’ in one single line. Go ahead and check it out.’ T . Y . P . E . W . R . I . T . E . R ‘

If you have any extra relevant information regarding this subject, go ahead and write down your views using your QWERTY keyboard layout in the comment section below !!

What Happens To The Human Waste After It Is Flushed In An Airplane
Security Flaw: 100 CRORE SMARTPHONES AT RISK! Your Phone Could Be One Of Them