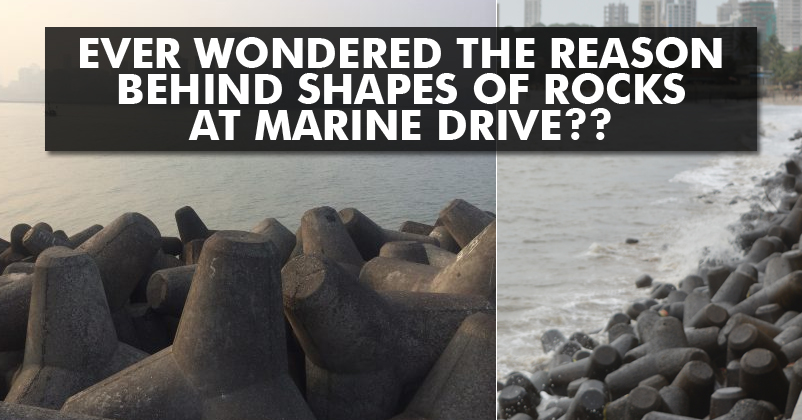 Mumbai, the financial capital of India is one of the busiest cities in the country. When it comes to Mumbai, Marine Drive is the first place to visit. During monsoon, the city looks gorgeous with the scenic beauty of the Marine Drive. If you have been at that place, you will notice a four-legged concrete structure all along the sea shore. So have you ever wondered what are these structures and why are they shaped in that way? Here is the answer:

Those four-legged concrete structures are known as tetrapods. They were first developed in 1950 by France Laboratoire Dauphinois d’Hydralique. They were imported to the city from Australia in 1958. There are approximately 6,500 tetrapods present at the Marine Drive each weighing about 2 tons. Tetrapods are used as protection units in case of high energy waves that hit the sea shore. They are placed in interlocking pattern and allows the incoming water waves to pass through them rather than against it thereby reducing the displacement and energy of the waves. These tetrapods are seen in many news articles, music videos, and Bollywood movies. These tetrapods are seen not in only India but in different parts of the world like – the North Sea in Germany, on the shore of Suruga Bay surrounded by Mount Fuji etc. Continue Reading
You may also like...
Related Topics:Here's The Reason Why The Rocks Alongside Marine Drive Are Shaped Like This.!!, Intelocking, Marine Drive, Tetrapods

10 Shocking Facts About Lionel Messi, The Greatest Footballer Of All Time
10 Myths & Truths About Workout & Fitness