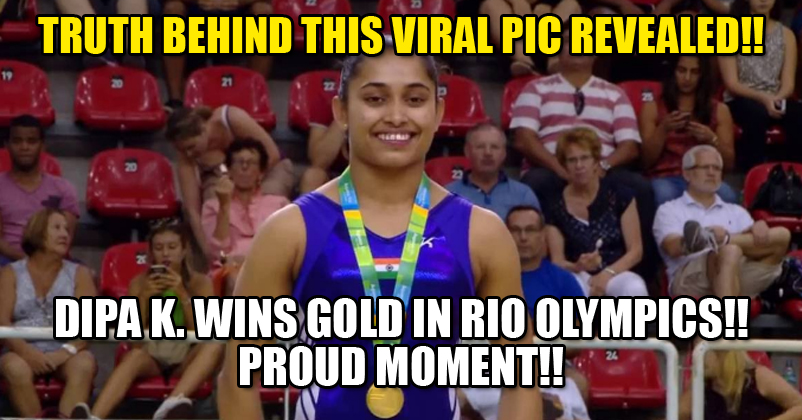 Such idiots are like babies. And there is no denying the fact that internet is a terrible babysitter. Ask it anything, it will provide you everything. And since being a terrible babysitter, whatever it teaches, people accept it as facts. And when a few masses of idiots start pushing a trend on social media, the rest of the innocent world also start following it without doing any prior research or fact check.

Hoax and fake messages is one of the cruel and embarrassing side of internet. As there is no authentic source required to post any message in interest of public awareness, sharing of such hoax messages usually goes viral.

The most recent trap laid by these idiots are the fake images and messages spreading false news of the triumph of Dipa Karmakar in Olympics 2016 where according to the fake news she has won gold medal after scoring a total of 14.833 points.

But in actual, the finals haven’t even taken place. It is schedule on 14 August 2016. Recently she performed one of the best moves which helped her secure the 8th spot in the qualifying round and a place in the finals. And with leap she became our country’s first woman gymnast to enter the vault finals. But some few mischievous people intentionally created a hoax image where she was shown as the winner. Have a look at the images. And these images have been shared at large. Even many big popular Facebook Pages ended up in this trap. These images were also brought under our notice by our users too to share this on our Facebook page. But as a responsible Media House, we decided to run a fact check and the rest of the story was just so dissapointing.

Well, we can understand that those guys are immensely waiting for India to get its first Gold Medal, but creating fake images won’t help them. Instead this will just bring in more confusions into the minds of people and our athletes who are playing out there. However, if we look at the brighter side ( depends on your perception ), the timings of some of the important live telecast of Olympics 2016 is not in compliance with the Indian Timing which halts many Indian Viewers to watch it late at night or in early morning.

With the increase in the number of shares of such hoax messages and fake images, people hare again excited and have started watching the live telecast. Admit it that it is important for people to watch these games so that the future athletes of our country can get inspired and work hard for achieving their goal.

But as I said earlier, there is no need of doing such things to boost up Indian Fans as we don’t any fake propaganda to support and love our athletes. They are representing our country in Olympics and this reason is big enough for us to support them on every match that they play. Olympics is not about winning medals, its about the stories of people who are participating in it. Their stories of fighting against the odd and representing their country.

Check out this fake video where Dipa Karmakar Is shown as the winner of Final Round. I urge you people not to believe on this video.

I request you all to stop sharing those images if you have been doing that lately and report such images if you find it anywhere on social media.