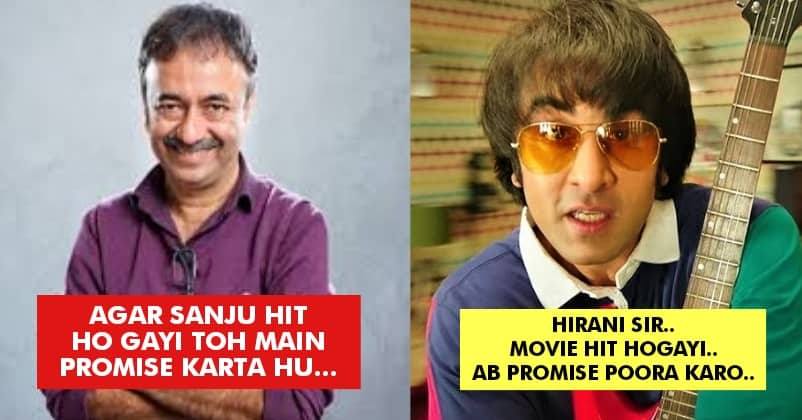 Rajkumar Hirani’s “Sanju” which is based on the life story of Bollywood actor Sanjay Dutt and features Ranbir Kapoor in the titular role has been going great on the box-office. The movie has already broken many records and is all set to cross the 300 crore mark shortly.

There is no denying the fact that Ranbir has worked very hard to step into the shoes of Sanjay Dutt and brilliantly portrayed him on the screen which is not at all an easy task. He has set a standard for himself with this biggest movie of his career and now fans’ expectations with the actor are quite high.

Apart from Ranbir, a major credit of the smashing success of “Sanju” goes to none other than filmmaker Rajkumar Hirani who is a magician when it comes to depicting emotions on the big screen.

For past some years, he has been giving blockbuster movies back-to-back, such as “Munna Bhai MBBS”, “Lage Raho Munna Bhai”, “3 Idiots”, “PK” and now “Sanju”. Considering this, it won’t be wrong to say that he is among the most sought after directors of Bollywood with whom every actor wants to work.

As per reports, Ranbir expressed desire to work with Rajkumar Hirani at least one more time during the promotions of “Sanju”.

Here’s what a source revealed,

“Ranbir told Raju that so far he’s made two movies each with Sanjay Dutt and Aamir Khan and all of them became huge hits. So he wanted to know when would the filmmaker do his second film with him as the leading man, discounting his cameo in PK. He also asked how many movies would Raju make with him.”

To this, Hirani said that he would do five movies with Ranbir.

As per the source,

“The filmmaker smiled and replied, ‘I’ll do five movies with you’.”

We all know that the ace director takes time to come up with a masterpiece and it will be interesting to see what would be his next venture with Ranbir.

Durex Trolled England As It Got Out Of FIFA World Cup & The Poster Is Too Witty
People Accused Karan Johar Of Nepotism & Slammed Him For Casting Janhvi. Here’s How Janhvi Reacted