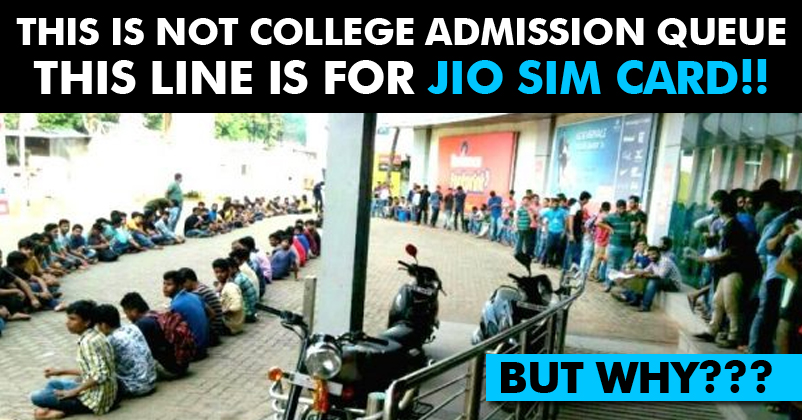 There was a time when Telecom Companies used to call us and made us feel like the king of the world by praising our choices and asking us to buy their sim cards for free which were worth of various call and messaging services. Definitely, they wanted to increase their customer base ! !

But the time has changed, AGAIN ! ! And this time, people are again running for the sim cards which these companies used to sell by calling us day and night. But what is that which has changed along with the time ? The answer certainly lies in this ad. Have A look.

Indian Telecom Operator Reliance JIO is currently the biggest trump card that the Industry has ever seen. With it’s amazing free 4g Internet offer, it has indeed shaken a lot of company’s internal policies along with their marketing and business models. And to be honest, such kind of competition in the market was indeed required.

According to the ad, a user who owns a JIO SIM CARD will get 90 days ( 3 months ) of FREE high speed 4G Internet Connection. However, as per the reports, initially this scheme was not getting many responses as getting a new Jio connection was not that easy. Initially, one had to buy a LYF company mobile phone, which was sold by Reliance Digital. People who bought LYF Mobile phone were automatically entitled for a free JIO SIM CARD Although after JIO sim cards were available for some other few smartphone vendors including Samsung, LG, Micromax, Asus and Gionee, people started looking out for these Sim Cards and now within no time, this JIO SIM CARD offer is a HIT.

JIO company is now owned by India’s Biggest company, RELIANCE INDUSTRY and in an interview with one of the customers of Jio Sim Card it has come out that he has till now downloaded more than 350 GB of data in less than 45 days and there has been no issues of connectivity or whatsoever.

And because of this new cheap or more precisely free 4G Connection, people in India are now preferring to switch over to this new carrier connection. And hence, because of this high demand and supply business model, there is an immense rush to many retail shops and vendors for whom Reliance Jio has emerged as a ray of hope. Previously these retail shops were at the receiving ends after E-Commerce websites like PAYTM, FREECHARGE and Flipkart started shelling out heavy discount on many products and services. However, rivals companies like Vodafone and Airtel are not very happy with this JIO sim card scheme and have alleged that Jio’s launch of free 4G Internet scheme is a commercial operations in the garb of testing which is totally unfair.

However, COAI ( Cellular Operators Association of India ) has claimed that this so called testing phase has indeed caused a lot of loss in revenue for Indian Government. According to LAW, these telecom operators are suppose to pay a fixed percentage of their revenue as a fee. However, COAI alleges that Jio is routing the revenues to LYF and hence not paying anything to the government. No matter what, this Jio Sim card is really doing wonders for many middle class Indian people who had been suffering from apparent slow 3G connectivities. What are your opinions about it ? Share your views in the comment section below.

Continue Reading
You may also like...
Related Topics:card, connection, free, Here's Why So Many Indians Are Standing In Long Queues To Get A SIM Card, India, internet 4g, jio, reliance, sim, Why Are So Many Indians Running After JIO Sim Cards ! !

Don’t Fall For This Whatsapp Hoax Message – Facebook Will Not Break Into Your Privacy
Here’s How You Can Buy Reliance JIO 4G SIM For Free !