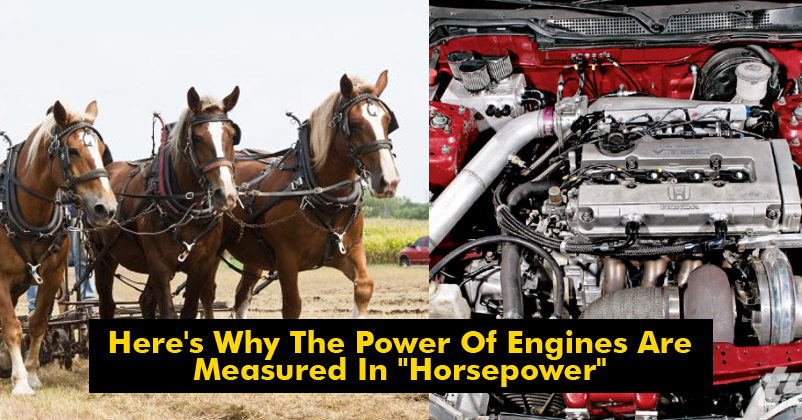 We come across many physical quantities in our day-to-day life. Like we measure the distance in Metres, force in Newtons, temperature in Celsius. Generally, these units are named after the scientists who discovered them or who worked extensively in that particular field. But when it comes to Power, it is measured in “horsepower”. So have you ever wondered why horsepower is used as the measurement of Power? Here’s the reason behind it:

In 1781, James Watt introduced an enhanced steam engine. It saved up to 75% of the fuel when compared to that of the existing Newcomen engine. But at that time a majority of consumers used draft horses for their mechanical needs. In order to explain to people that his engine was more productive than draft horses, Watt came up with a solution. He wanted to bring out a comparison between his engine & draft horses. With a series of experiments, James Watt calculated that a typical draft horse could do nearly 33,000 foot-pounds of work (i.e to lift a 33,000-pound weight in 1 foot) in a single minute. Thus, he gave birth to a new unit – horsepower.

Mathematically horsepower is defined as follows: Even though the value of horsepower was not clear, it didn’t stop buyers from buying Watt’s 5 horsepower engine. In simpler words, his engine can do a work approximately equivalent to 5 horses. The term horsepower is still used as a supplementary unit to the output power of turbines, piston engines etc.

Continue Reading
You may also like...
Related Topics:Here's Why The Power Of Engines Are Measured In "Horsepower".!!, Horsepower, James Watt, Steam Engine, Why we will use horsepower as a unit of measurement

Now You Can Earn Lakhs Every Year By Playing Pokemon GO Game In India ! !
An Unfortunate Thing Happened With Mouni Roy On Sets Of Jhalak Dikhhla Ja!