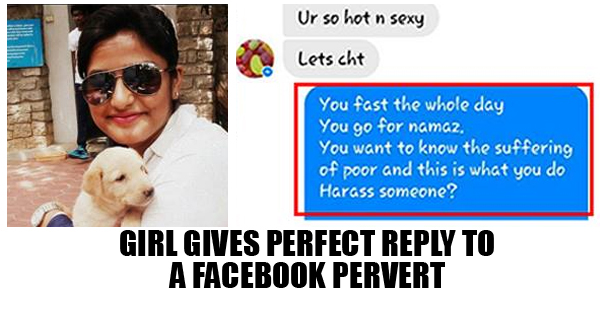 This kind of messages have been all over Facebook, and believe us they can be very annoying at times. Not only women but men have also been targeted at times. Say,fortunately or unfortunately we have only seen girls coming out in open and telling the world about the problem, so that at least the jerks get a piece of their own shit that they spread.

If you are one of such person, who has faced this. Please come out in open and tell us. We will make sure that such Wannabe’s get a lesson.

Just like this girl who actually got so annoyed with the crappy messages that she was getting from an unknown guy that she eventually had to dread out her anger by posting the chat conversation to make him feel ashamed.

If you don’t know a person, What’s the point messaging.
Also, if you don’t have anything good to say. Don’t Speak Discrimination is Bad so is Harassing someone Yes, We know the reply could have been better, but when someone is annoyed and angry, This is what happens.. Continue Reading
You may also like...
Related Topics:Facebook, Perverts

Extremely Hilarious! These 5 Photos Of Superheroes Perfectly Prove Saying “LIKE FATHER, LIKE SON”
12 Hottest Footballers Ruling In Your Girlfriend’s Heart