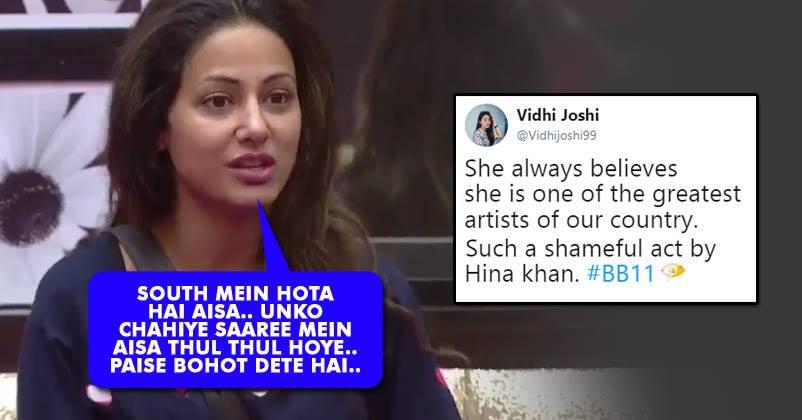 Bigg Boss 11 has already created a number of controversies but the controversy which has been started by Hina Khan is the mother of all controversies. Hina Khan is a TV actress who is best known for her role as Akshara in “Yeh Rishta Kya Kehlata Hai” and she has constantly been in limelight for her behaviour in Bigg Boss 11. 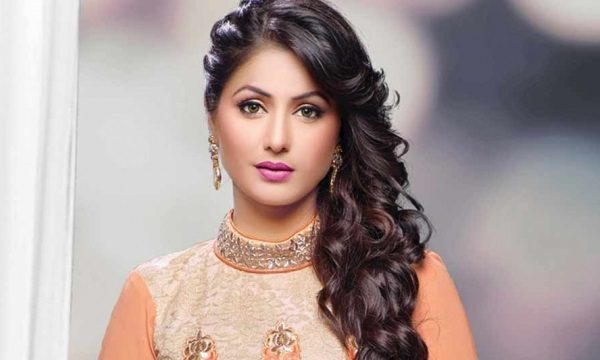 A video is going viral on the micro-blogging site in which Hina can be seen insulting the South Indian actresses by fat-shaming them. She claimed that she was approached by two big production houses of South but she rejected as they wanted her to put on weight.

Other housemates also made their contribution in the discussion but Hina Khan was the main speaker. She said that South Indians like their heroines to be bulgy and want to see their curves bulging out from saree.

Twitteratti didn’t like the statements made by Hina Khan and as a result, she got trolled mercilessly for her comments. There are many actresses in the South Indian film industry who are not at all overweight and Hina should have shown some respect to the South actress while keeping her views in front of others.

Hansika who is also from the South Indian film industry took a jibe at Hina:

Doesn't she know a lot of Bollywood actors hv worked & are working in the our south industry ! Shame on you #hinakhan for trying 2demean us https://t.co/6ByNcYt8yI

And furious reactions outpoured on the micro-blogging site! Here are some of the selected tweets:

she is disgusting and pretending herself. she insulted South actress but she didn't know that most of the movies are copied from South movies and now most of the South Indian actress working in Bollywood as compared to Bollywood actress.@ssrajamouli #BB11 #BiggBoss11

She needs dignity lessons from South:

They need lessons from south on how to be dignified..That's why they remain where they are n our girls zoom past them..🙂🙂 https://t.co/PVJ7Gt0lSD

She’s creating her own stories:

Wtf is she saying abt venky n MB fans?? She knows nothing 😂😂😂 creating her own cock n bull stories 😂😂😂

Hina must read this:

Bulgy? Did she see the movie- SVSC? Samantha was Bulgy?? @eyehinakhan , U got no eyes then!
Actually ur Bwood,baring few makes crap films!

She has verbal diarrhoea:

Salman Khan should take an action against her:

However, there were few who didn’t find anything objectionable or offensive in her statement:

I dont see the degradation? Just the truth. You all just need a freaking reason. She literally didn't say anything bad.

https://t.co/d8kbeluiTO please see this and she said "directors ask" them not they are like that