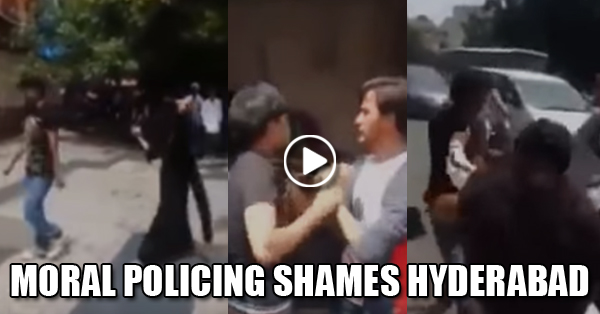 Most of us were of the view that India went a little Intolerant in the recent past where a particular political party in power does what it feels right, where minorities are crushed by majors and where poor are becoming poor and nobody is bothered to even ask them about their need. But did INDIA Really get Intolerant? Several debates were held on National News Channels, discussions were held between Religious heads, many even returned their awards & rewards pertaining to the same Issue. But was the Issue really that Serious? Or did some evil minds and Media houses wanted two different religions to fight over an Issue which was never an National Issue??
A shocking video is uploaded on a Facebook Page where it is seen that a Muslim Girl & A Hindu Guy walking out of a movie theater are caught by some goons outside the theater who as seen in the video were against the fact that How can a Muslim Girl Date a Hindu guy and how can they both go for a Movie Together. They didn’t hesitate to abuse them and even kick the boy and slap him and push him out of the theater. That’s not all, they followed him on the road and continuously slammed him from behind while abusing him and the girl.

This is highly disappointing that a place like Hyderabad which as of today is the 5th Fastest growing cities in India, people there still have hatred against each other. This is not the first time that Girl & Boy of two different religions are slammed for being together. But this issue have never been raised by Media Houses. Reason? May be they don’t get the Desired TRP for such stuffs. Awards & Rewards were not returned for such acts of Moral Policing, Reason? May be this doesn’t give them that Media Attention which they could have got over a Beef issue etc.

THIS ARTICLE HAS NOT BEEN POSTED TODAY FOR ALL OF YOU TO FIGHT IN THE COMMENTS!!

This has been posted to give it a thought!! A Thought that whether you need Love & Peace in this World or You Need War, Killings, Blood Shedding in the World. Its time we take the Decision and Promote brotherhood instead of slamming each other

Continue Reading
You may also like...
Related Topics:Hindu Boy Was Dating A Muslim Girl. What Muslims Did With That Guy Will Shock You, Hyderabad, Moral Policing

A Husband’s Tribute To His Dead Wife After Paris Attacks Would Make Anyone Emotional
They Look Like Normal Steps – But When the Waves Roll In? This Is AWESOME!