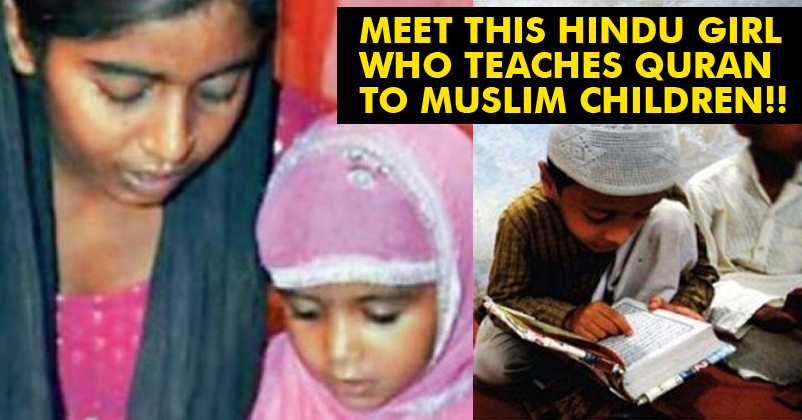 It is said that humanity has no religion. See around and you’ll find there is no religion of birds, animals and plants, then why for human? God has not created any religions, he created only humans.

Something amazing happens every evening in Agra, a classroom held every evening in a temple premises in Agra’s Sanjay Nagar colony. Every evening the 18-year-old Pooja Kushwaha, who is herself a class XII student becomes a teacher in the evening and teaches Quran lessons to 35 Muslim kids in the area. She spoke to the Times of India, she revealed that she learned to read Arabic from a woman of mixed faith in their locality. She began teaching the Holy Quran to the kids despite being a Hindu. She told Times of India:

Many years ago, there was another woman of mixed faith in our locality. Born to a Muslim father and Hindu mother, Sangeeta Begum used to hold Quran classes for the kids. I got interested in the holy book and started attending her classes. I made steady progress and was ahead of all others in her class soon. Some personal problems forced Sangeeta Begum to discontinue her classes, so she asked her pupil to take up her role and teach kids Quran. When her teacher requested, Pooja took up the responsibility of teaching Quran to the Muslim kids in the area. She told TOI:

She taught me an important tenant of Islam, that there is no point in gaining knowledge if you don’t share it.

Since then, Pooja started teaching for free, most of the kids cannot afford to pay, and she doesn’t ask for any type of fees. She began teaching the kids at her house, when the no of students increased, the locality elders her the premises of the temple for the classroom.

Everyone is proud of her efforts. When TOI asked the Muslim leader, the 70-year-old Haji Jamiluddin Qureshi, who runs a school of his own and manages many social forums. He said,

It’s heartening to know that such rare examples of communal harmony exist in our city. A teacher is a teacher and her religion doesn’t matter as long as she knows the holy scripture well. Moreover, Islam doesn’t object to anybody learning Arabic or reading Quran.

Hold Your Breath! After Free Outgoing Calls, Jio Is All Set To Launch 1 Gbps Broadband
War Of Words In Mid-Air In Indigo Flight Over Food!