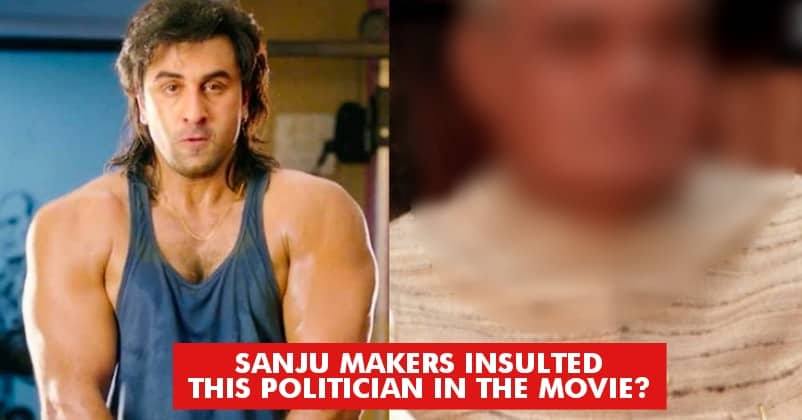 Ranbir Kapoor starrer “Sanju” which is based on the life story of Bollywood actor Sanjay Dutt hit theatres on June 29, 2018 and just within 3 days of its release, the flick entered 100 crore club, breaking many records and becoming the year’s highest opener as well as highest first weekend earner.

Rajkumar Hirani’s direction skills did wonders once again and viewers as well as critics can’t stop praising this magnum opus. Even Sanjay Dutt himself was so moved after watching the movie in a special screening that he started crying and hugged Ranbir and Hirani, demanding to make its sequel.

Since “Sanju” is the biopic of Sanjay Dutt, it depicts his journey from being addicted to drugs to getting imprisoned in 1993 Bombay blast case along with other important events.

In one scene of the movie, Rajkumar Hirani has walked on the edge of insulting a political leader. Sanjay Dutt had visited a very prominent and influential politician in order to request him for help in his legal issues.

The director recreated this scene in “Sanju” as Ranbir met a political leader whose role has been essayed by Aanjjan Shrivastava. Nevertheless, when the protagonist described all the problems and legal issues he had been facing, the politician just fell asleep and a satirical voice-over was heard when Ranbir said,

“We still don’t know whether he pretended to go to sleep to avoid hearing my problems or he actually fell asleep.”

People who know about the story of Sanjay Dutt can easily identify which politician they talked about in the flick, thanks of his poetry and oratorical skills. Moreover, we all know that in the year 1999, Sanjay visited the then prime minister of India to seek his help in the legal cases.

On being questioned about this scene, this is what is stated by a member of the censor board,

“We all knew whom the film was referring to. But he is mentioned only as ‘The Politician’. If we raised a hue and cry about it this venerated politician’s name would’ve been out in the public domain and the film’s team would have denied it was the politician we all know.”

We must say that it was a smart move on the part of the moviemaker as the film easily got away by hiding the politician’s identity. What do you say?