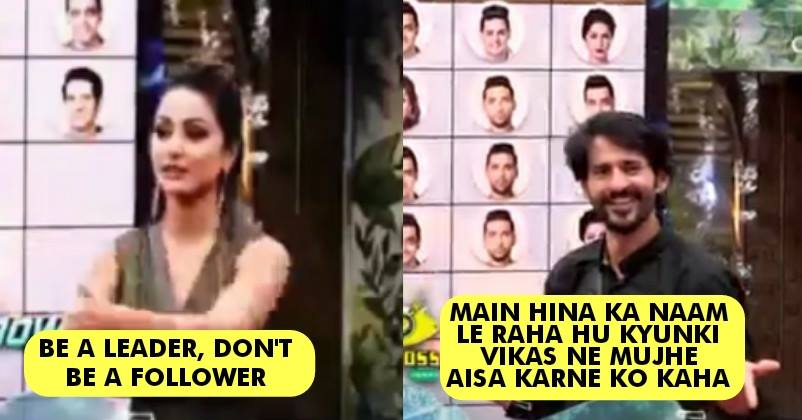 Hiten Tejwani is playing really well and there are no doubts about it. However, he got some advice from his wife Gauri Pradhan when she came to meet him in the Bigg Boss house yesterday. Well, Hiten got a very good surprise from Bigg Boss, and he was super happy to meet Gauri and his kids.

Gauri asked Hiten to start taking decisions and stand for himself. She even hit back at Hina Khan, for commenting that Hiten is spineless and is a follower. However, Hina still continues with these comments; in the recent promo, contestants are seen playing a task.

As per this task, they are asked to name 3 co-contestants who are not worth being in this competition. There are cardboard cut-outs of each contestant and one has to pick 3 of them. Hina Khan names Hiten and says that she feels he should be out of the game because he’s a follower of Vikas. Yes, she feels that Hiten always does what Vikas tells him to do.

Now, when it was Hiten’s turn, he gave him an epic reply. He takes Hina’s name and sarcastically says that Vikas asked him to do so. All other contestants burst out into laughter; even Salman Khan enjoyed this moment. Hina is pissed off with this, but she manages to fake a smile. It would be worth seeing how she reacts later on.

Twitter loved Hiten’s golden reply and praised him for that. Check it out…

I can feel the burns!

#BiggBoss11 can u pls show tomorrow's just now…hiten's reply to hina in promo hahaha so Savage!! I can feel the burn 500kms away from Bigg boss house on my sofa 😂 #bb11

OMG hiten reply in the precap to Hina was superb. #bb11

#BB11 special mentions Gauri&kids brought in a breath of fresh air for hubby dear… after which his reply to Hina in the precap was epic! New side to #Hiten… loved the precap

Everyone loved Hiten’s new side. What about you?