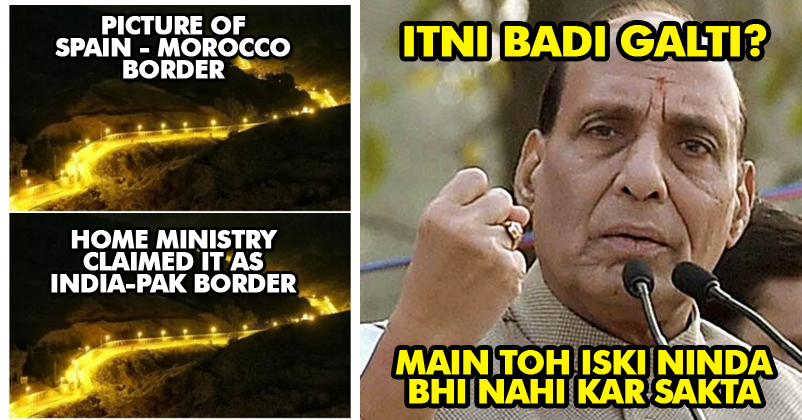 We have seen fake photographs of different countries on social media where people claimed them to be an Indian city. But today, we are here with a screenshot from Home Ministry’s annual report which portrayed the border of two different countries as India-Pakistan border along with construction statistics of floodlight installation. Read the complete article to know about it.

In the screenshot, a picture of a border is seen, which is beautifully lit up by floodlight and above the image, it is stated, ‘State-wise details of floodlighting along IPB’ along with the report of floodlight construction in Punjab, Rajasthan, Jammu International Border and Gujarat. The bottom of the image is captioned as Floodlighting along the Border. This was published on the 40th page of the annual report.

The catch here is that the image used in the report is actually not from Indo-Pak border. It is an image of Spain-Morocco border which was originally captured by a Spanish photographer, Javier Moyano in the year 2016.

Here’s the screenshot from the annual report. When the news went viral, Home Minister Rajnath Singh ordered an inquiry to get to the root of how a photograph of Spain-Morocco border was used in the annual report of the construction of floodlight along the India-Pakistan border.

“We are enquiring into the matter and will issue an apology if there is merit in it.”

This whole blunder was first reported by altnews.in.

The annual report is a compilation of all the projects undertaken by the Home Ministry in the past one year. It was tabled in April during the Budget session of Parliament.

Altnews also shared some other details about the photograph. It stated,

“Spain and Morocco have a sea between them but there are Spanish conclaves on the north coast of Africa that have a fenced and floodlight border with Morocco.”

This was certainly a major goof up from the government itself. We don’t expect such mistakes from the office of Home Ministry. We can only imagine what impact it might have if the original owner of the photograph looks up to the matter seriously.

Do let us know your thoughts on this in the comments section below.

Woman Raped In A Moving Train By Pantry Car Staffer! Has Humanity Died?
Baba Ramdev Lands In Legal Trouble! Non-Bailable Arrest Warrant Issued Against Him For This Reason