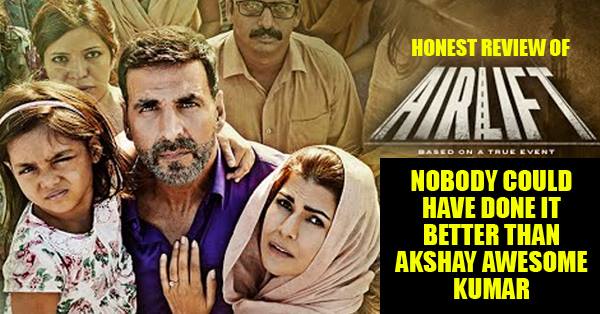 Akshay Kumar starrer “Airlift” is released today and even if you are not a fan of the actor, you just can’t afford to miss it. The movie also stars Nimrat Kaur in the lead role and Raja Krishna Menon has made his directorial debut with “Airlift” and we bet he couldn’t have expected better than this.

The movie is based on the real incident of 1990 when Kuwait was attacked by Iraq. At that time there were nearly 1.70 lakh Indians living in Kuwait who were on their own after the invasion. An Indian businessmen living in Kuwait named Ranjit Katyal (played by Akshay Kumar) came out to support and help his countrymen in evacuating Kuwait and coming to India. Ranjit Katyal did everything that was necessary for this evacuation; which is India’s biggest rescue evacuation till date and Air India’s name is written in the Guiness Book of World records for this operation.

This can be termed as Akshay’s best performance of his career and hardly you can think of anyone else to play this role so wonderfully. What’s more, Nimrat has also played the role of Amrita to the perfection. However, this movie is incomplete without the superb work done by the supporting cast and its praise-worthy cinematography and editing.

This 2 hours & 10 minutes movie is definitely a masterpiece worth watching, so just don’t miss it.

This Man Drank 10 Cans Of Coke Daily. How He Looked After A Month Will Scare You
What? Another Contestant To Get Evicted From Bigg Boss 9 Just Before Finale?