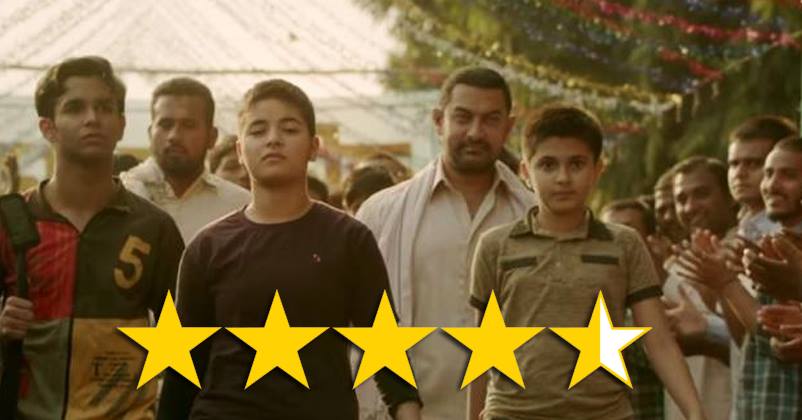 Dangal, the Bollywood sports biopic is getting all its due attention due to superstar Aamir Khan, who has shown a fantabulous performance. His physical transformation for the movie is surely worth an applaud. Aamir has done complete justice to his role of Mahavir Singh Phogat, the national wrestling champion turned coach; in fact, after seeing his performance, you will find it difficult to make out whether Aamir is a sportsperson or whether he is an actor. The story of the movie revolves around a Haryana man who had the daring to do the impossible i.e. to transform his daughters into wrestling champions under his guidance. Moreover, it also portrays the father-daughter relationship really well. The aspect of story-telling is perfectly taken care of and it has some crowd-pleasing and rousing moments. The movie deserves the 4.5 stars rating and it is definitely going to create that “Jai Bharat” wala moment in the movie halls.

The young actors Babita and Geeta have done a fabulous job and have won the hearts of the audience right from the time the trailer was launched. The second half concentrates only and only on how to win, thereby giving us some Goosebump moments.

The authenticity of the movie is something that has impressed the viewers. It doesn’t just look that the girls are acting for the medals; it looks as if they are actually fighting for it. Even Aamir’s on-screen wife Sakshi Tanwar is a great choice. Dangal is a no-starry affair, but is perfect in every sense and has a deep meaning attached to it, which is cherished by one and all. The traditional society norms have been broken apart by the film in the best possible manner. At the end we can say that this Aamir Khan starrer is “Real” and is going to be a blockbuster! So aren’t you waiting to watch the flick? Do book first day first show tickets as you will not be disappointed.

Rishi Kapoor Lost Cool & Slammed Everyone Who Had A Problem With The Name “Taimur Ali Khan”
How Can “Kaabil” Makers Commit Such A Big Mistake? SPOILER ALERT!