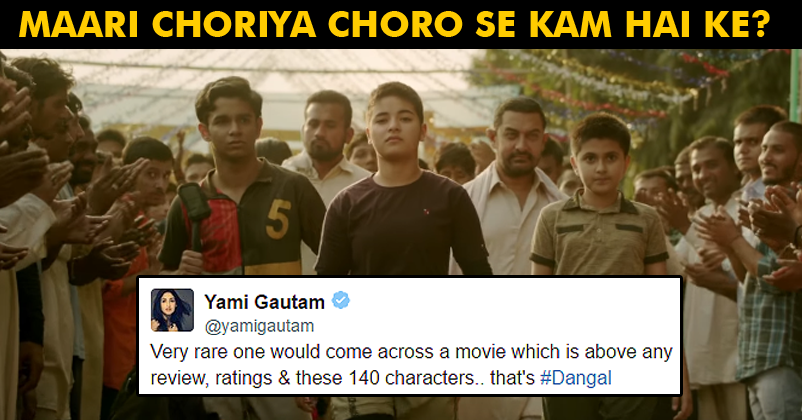 Finally, “Dangal” has hit the screens today and the social media is filled with reviews. It goes without saying that critics and audience are mesmerized by this magical movie. The film has indeed left a great impact on the audience. Yes, this Aamir Khan starrer is winning appreciation from the public and everyone is of the opinion that the direction is brilliant and outstanding. Suhani Bhatnagar and Zara Wasim as young Babita Phogat and Geetha Phogat have shown an exceptional performance and have won the hearts of viewers. To be precise, “Dangal” has been the best movie of Aamir Khan and this is the reason why positive response is being poured in from all ends, right from the premiere show.

The entire cast has worked really hard on the movie and the output is a “Powerpacked” story. The dialogues have been impactful; overall everything is perfect!

My Family saw #Dangal today evening and thought it was a much better film than #Sultan. Love u personally Aamir but hate u professionally ! pic.twitter.com/sJlDG7u95c

You make the wait for all your films so totally worth it @aamir_khan! Kudos to you and team #Dangal for this absolute gem! What. A. Film.

An amazing story of a father and daughters which has made me believe that a girl is no less than a boy ! Dangal will move you @aamir_khan 🙏

#Dangal is perfection in every department of film making.This film will stay in my heart for a long time. Superb casting of brilliant actors

Gosh! What a film.. emotional and so entertaining. The best in the last five years at least.. Dangal!
Feel like a novice. So much to learn!

Perfection in every department!

#Dangal is perfection in every department of film making.This film will stay in my heart for a long time. Superb casting of brilliant actors

Proud to be your fan!

#Dangal has been watched

Still under the spell!

Two Times standing ovation !!!
What a Brilliant , MASTERPIECE , Realistic Movie #Dangal !!
Aamir Only u can made audience emotional 🙏

Aamir Khan is a LEGEND and #Dangal is a CLASSIC

Dangal girls stole my heart while inspiring me at the same time.. Fatima, Sanya, Zaira, Suhani you are amazing!! ❤️❤️ #Dangal

Above ratings and reviews!

Very rare one would come across a movie which is above any review, ratings & these 140 characters.. that's #Dangal

Dangal!! WHAT A FILM! Fully Dhaakad!So inspiring & entertaining with such amazing performances. @aamir_khan sir you make us proud! Hats off!

So have you watched Dangal too? What’s your review? Share your views in our comments section below!

Forget Raees, This Upcoming Movie Of SRK Will Break Records! He’ll Play An Avatar Like Never Before
Forget Priyanka Chopra; This Hot Actress Is All Set To Rock The Sets Of Kapil Sharma’s Show!