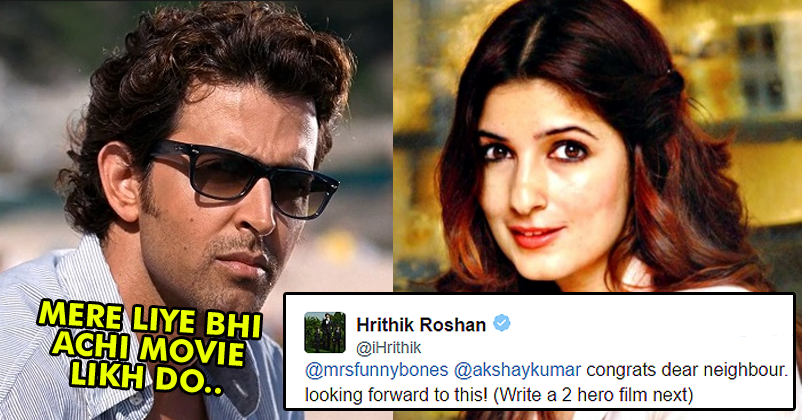 Twinkle Khanna is making a comeback in the Bollywood industry but as a producer and not as an actress and her first film is “Padman”. The movie is based on the real-life story of Arunachalam Muruganantham who dropped out of school in Coimbatore and went on to provide sanitary napkins to poor ladies all across the rural India. R. Balki is not only directing the flick but also writing its script, so it’s going to be a must watch for everyone. Twinkle took to Twitter to make the announcement about her new journey as a producer:

Mrs Funnybones Movies – first production -written and directed by the brilliant Balki -Pad up and get ready ! https://t.co/rIsTicWbXY

We all know that Twinkle has made more fans with her skills of writing rather than acting and her wittiness once again came into play when her good friend and neighbor Hrithik first congratulated her on the new start and then requested her to write a script for him. @akshaykumar congrats dear neighbour. looking forward to this! (Write a 2 hero film next)

Well, the way she refused will turn even her number one critic into her fan:

So as of now, it seems Hrithik will need to meet someone else for writing the script! Meanwhile, we are eagerly waiting for “Padman” to release.

Man Called Her A ‘Pros’ & Shared Her Number. How She Dealt With Him Will Make You Her Fan
WTF! She Was Harassed But The Man Was Presumed Innocent Just Coz He Was A Father Of 2!