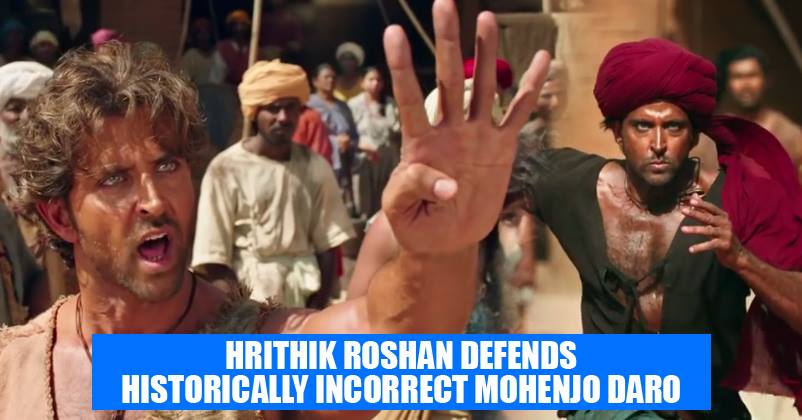 There is a stiff competition going on for the upcoming releases ‘Mohenjo Daro’ & ‘Rustam’. Although, Bollywood seems pretty excited for ‘Rustam’ as a result of which ‘Mohenjo Daro’ is facing the heat. Already, the movie has failed to garner attention, and whatever little it managed was for wrong reason.

Many historians and scholars targeted the film and accused it of wrongly representing the aesthetics and being historically incorrect. The film which is based on the Indus Valley Civilization, showed Pooja Hedge adorning a gigantic, feathery piece of headgear and wearing a dress with high slit, which irked many people and they directly battered the movie.Indeed, women weren’t dressed like that during those periods. Sigh! However, being star-cast in a period film, and that too after delivering a cult like Jodhaa Akbar, which in case was also directed by Ashutosh Gowariker, Hrithik Roshan came out to defend the movie.

He said, “You know, there are theories. There is no recorded proof. It’s pre-history. So there is no record of whether it’s accurate or it’s not accurate. There are just theories which have been floated by historians. So the director had to pick one theory and construct his story, his film on that foundation. So he has used one theory.”

As far as controversy is concerned, many people had issues with the title track as well. Since Mohenjo Daro literally means mound of the dead, and people during that civilization weren’t aware of its meaning. Now, that the movie is making headline with just 2 days left for its release. We hope that this helps the movie to rake some box office collection.

We know many true blue Hrithik Roshan fan will watch this movie. But honestly which movie do you think can do better business? Which will be a winner at the box office?
Cast your vote in the comment box below! Let’s see which movie wins!

This Is A Miracle! Bahubali 2 Earned 350 Crores Before Release Itself! Here’s How!
Sonam Kapoor Shared Her Hot Beach Pics & They Will Make You Forget Even Top Models