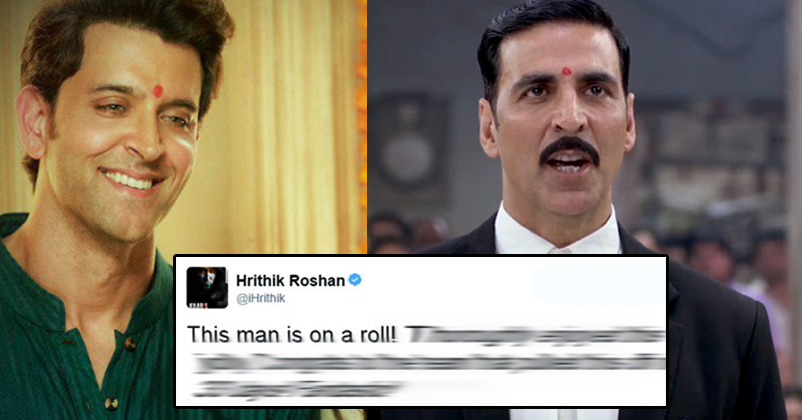 Akshay Kumar starrer “Jolly LLB 2” is going to hit the theatres on the 10th of Feb but words of praise are already pouring in for Khiladi Kumar and his team. Akshay took to Twitter and shared a poster with caption, “The stage is set for the biggest courtroom battle – The State VS. Jolly only #4DaysToJollyLLB2” The stage is set for the biggest courtroom battle – The State VS. Jolly only #4DaysToJollyLLB2 pic.twitter.com/nkQwjf9FWD

The “Kaabil” star and Akshay’s friend, Hrithik Roshan, took to Twitter and admired the actor and his team after watching “Jolly LLB 2” at a special screening organized by Akshay Kumar for close friends. This is what Hrithik tweeted, “This man is on a roll! Thoroughly enjoyed this jolly. Congrats to the team that pulled this off in 33 days! Fantastic!”

This man is on a roll! Thoroughly enjoyed this jolly. Congrats to the team that pulled this off in 33 days! Fantastic! https://t.co/LyQyDA4M2k

We don’t have a doubt that Akshay is on a roll, as he is giving superhit movies one after another and going by the trailer, we are sure that audiences are eagerly waiting for the release of the movie. It’s the sequel of “Jolly LLB”, in which the lead role was played by actor Arshad Warsi. The flick not only performed well on the box-office but also won a National Award. Actress Huma Qureshi is playing the female lead while Saurabh Shukla is back as a judge in “Jolly LLB 2”, which is directed by Subhash Kapoor. It is good to see Bollywood actors supporting each other as Akshay also appreciated Hrithik for his wonderful performance in “Kaabil”. However, it will be interesting to see as to how much Jolly LLB 2 will affect the business of “Kaabil” and “Raees” as both the movies are still doing pretty well on the box-office. Will “Jolly LLB 2” surpass the earnings of “Kaabil” and “Raees”? Let us know your views in the comments section below.

10 Bollywood Actors Who Didn’t Gain The Respect They Deserve!
10 ‘The Kapil Sharma Show’ Jokes That Will Make You Burst You Into Laughter!