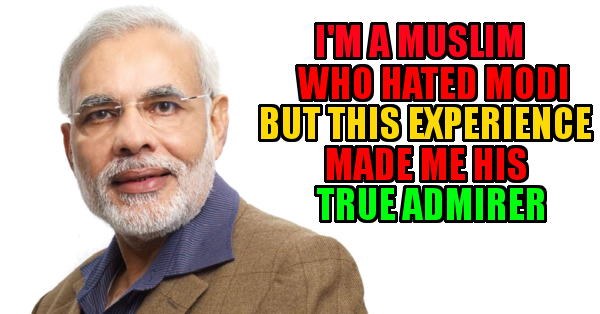 Prime Minister Narendra Modi is facing a lot of criticism nowadays, he has been getting blamed for the communal activities going on in the country despite the fact that law and order is the responsibility of the state governments. He is on the receiving end when it comes to his foreign trips however; he is attracting other countries to invest in India so that the industrialization process of the country speeds up.

The writers, filmmakers, scientists and historians are lining up against him and returning their awards to let the world know how angry they are with this Modi government.

So for all those people who have only hatred in their hearts for PM Modi, we are bringing you a story which will let you see the humane side of the Prime Minister.

Col. Faraz Amir, who has shared this story, has stated himself that he is a Muslim and used to hate PM Modi before reading this story but now he doesn’t hate him anymore.

Read his story below:

“I used to hate modi from the bottom of my heart but after reading this, I am his true admirer! I am sharing my personal experience which was shared by a retired colonel himself recently i came across!

In the year 2010, he kept in touch with the Ministry of Pensions requesting that incorporate my mom’s name (Sharadha) as a retired person. She’s 89 years of age now, and she’s the family retired pensioner.

In the year 2012, because of my dad’s coming up short visual perception, I reminded them (MoPn) by email and additionally by telephone. I was informed that they were handling the solicitation and will be sent the reexamined papers “soon”.

It was 2014, and my father had still not got any affirmation about my mother’s name being incorporated as a family beneficiary. He passed away accepting his wife won’t be the beneficiary of that 25,000/ – Rupees every month as her annuity. When I went to the bank after my father’s death with every one of the papers, they said my mother’s name was not in the annuity installment request. Baffled, I sent a duplicate of the prior correspondence of 2010 to the benefits service. Inside of 4 days, I got an email from some representative saying the papers will be prepared inside of a week (not an ambiguous “soon”).

On the fifth day, I got a telephone call from a man who presented himself as Dr. Jitendra Singh and he said that the papers with my mother’s points of interest had been sent to the bank that very day.

I hung up in the wake of saying thanks to him. When I checked their site, I figured out that Dr. Jitendra Singh was the minister of state for pensions and personnel grievances, answering to a Sr. cabinet minister who was Mr. Narendra Modi himself.

When I got back to thank the minister, he humbly said it was the PM’s order that no lady who has lost her spouse as of late ought to be further damaged by postponed printed material on annuities. What Manmohan Singh did not do in four years, Narendra Modi did it in only four days!

What’s more, a month ago when my mother needed to give her life endorsement to the bank, a bank officer got back home to get her mark because of her old age. (A year ago, I had taken my 93 years of age father to the manage an account with extraordinary trouble). The bank likewise affirmed it was a Finance Ministry order to treat senior subjects with additional affectability!!

You may choose to share if this mail acquired out tears your eyes as well.”