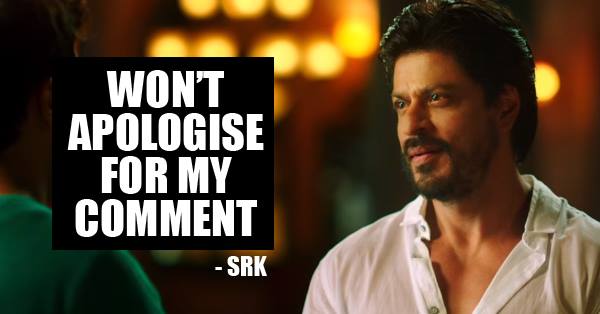 There has been much controversy with regard to SRK’s “Intolerance” comment; however, he is of the opinion that he didn’t say any such thing for which he needed to apologize. What’s more, Shah Rukh expressed his utter sense of regret since his latest release “Dilwale” is unfavorably affected on account of protests by people who “misconstrued” and “misinterpreted” his remark about India.

To mention what he maintained while promoting Dilwale, “I have not said anything that I should apologize (for). I will fall in my own eyes if I do that.”

Quite obviously, protests have sadden him and he has articulated his grief saying he wants to make his work reach as many individuals as possible since this is how he can return fans “love” they give him. Not only this, he also appealed folks to watch Dilwale.

According to Shah Rukh Khan, his “Intolerance” remark hadn’t been presented appropriately. In his words, “At some point of time, I do regret people could not understand what I said. It was not represented properly. If anybody feels bad about it, I regret it completely.”

He added, “I just want to wish that all the people who wish to see the film on their own, please go out and see it. Don’t get misled by people who perhaps misconstrued what I am saying, so I regret that this has happened. I feel extremely sad.”

“I apologize if somebody got disturbed, please go out and enjoy the film because it’s not me, there are thousands who have made it with a lot of love.”

“(It’s) too hard for me to understand why something that we make for your happiness would somehow turn into something that becomes controversial or tainted.”

SRK’s statement made Bajrang Dal activists angry and they did not let Dilwale hit cinema screens in Bihar’s Patna and Araria. Apart from these, a number of other places like Jabalpur, Varanasi and Ghaziabad also witnessed protest against the movie.

Shah Rukh has asserted that the controversy related to the “intolerance” comment has affected the Dilwale’s box-office earnings in some parts of India.

“Yes, box office collections have been hit, I don’t know exactly the places. But they have been,” said Shah Rukh.

“I have been an actor for 25 years in this country. I would like to say I received love from every corner of the country, in spite of religion, region, caste, creed, gender.”

Some images of King Khan are going viral on social media which he found offensive and he said that he has no relations with some of the people whom he have been shown associated with.

Shah Rukh further added, “A lot of the things I say are misconstrued perhaps, misrepresented, perhaps misinterpreted sometimes. And I am not someone who can sit here and say… this amazing amount of love from my countrymen and women… I have any issue with it in terms of tolerance and intolerance. So I don’t.”

“But of course like the other day, I was sitting in and somebody put a tweet which does not belong to me. And I can’t clarify.”

“I see a news which say I am related to an X person who is entirely against my country but that’s not true. I have no logistic way to explain all this, at my stage and age. I am a representative of my own country and I am thankful to everybody, but I can’t keep explaining that.”

8 Things You Must Know About The New Juvenile Justice Bill
Your Nails Indicate These Things About Your Health!