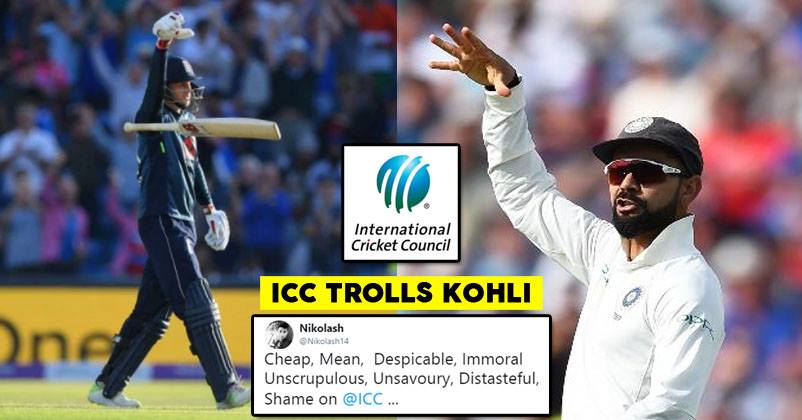 However, his fans aren’t very happy due to ICC’s tweet which mocks Virat’s reaction. After India was defeated by England by 31 runs, ICC took to Twitter to post a pic of Virat and Root.

The picture was captioned as “Root Out”; in that, ICC also added a microphone and a fisted hand. In the pic you can see Joe and Kohli discussing something and the mic falling from Root’s hand.

As soon as ICC tweeted this, many Indian fans slammed it for being too “Foolish”. Here are some of the reactions;

Should not be taking sides!

@ansongregorios so…. It's simple English! ICC cannot be so disgraceful and most importantly… Should not be taking sides when it comes to something between two individuals!

Virat is the best!

This is not International Cricket!

shame being a governing body, you must show maturity in your activity! lets see next match, you scratched Lion, sure will hear it roar 🙂

So guys what do you have to say about this? Did ICC do right by tweeting this?