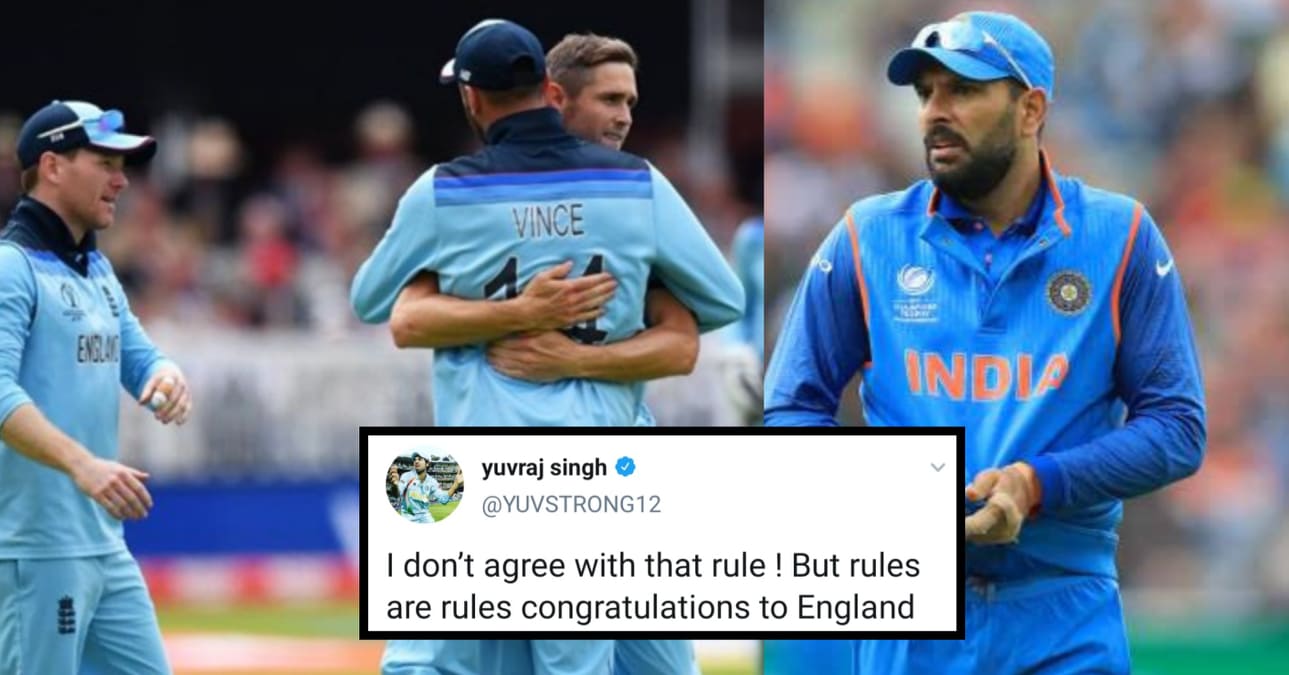 England cricket team held the world cup the trophy for the very first time in its home ground after defeating New Zealand. The game was full of drama and everyone who watched it felt the adrenaline rush regardless of their nationality.

New Zealand played first and put up a score of 240 for England to chase. England tried very hard to chase it. It was neck to neck competition but in the end, they only managed to bring it up to tie. According to the ICC’s rule, when there is a tie in the finals, both the teams get a super over to play. Now England went first and scored 15 runs off 6 balls. New Zealand chased the score and again it was a tie.

Whoa! This has never happened in the history of the world cup.

Now that, super over was also a tie, according to ICC rule whichever team had given the maximum number of boundaries will be declared the winner. And that’s how England won the cup.

These two teams were totally worthy of a final. See how twitterians are going crazy over the match, result, and on-field drama.

Hard luck to Kane and his team. They definitely lit up this world cup. 👏#CricketWorldCupFinal #ENGvsNZ

Was that a cricket game or a star plus TV show ? #somuchdraama😲😲 probably the best odi game ever #incredible 👏👏 #CWC19Final #ENGvsNZ

Serious game of cricket! Congrats @ECB_cricket but extremely proud of each and every @BLACKCAPS player!! Speechless! Heart goes out for the boys!

I don’t agree with that rule ! But rules are rules congratulations to England on finally winning the World Cup , my heart goes out for the kiwis they fought till the end 😥. Great game an epic final !!!! #CWC19Final

What a thrilling final it was, congratulations @englandcricket 👏🏼 well played @BLACKCAPS 👍🏼#CWC19Final

Wow what a day for sport…. great spectable for tennis and cricket. Congrats to all the winners👏🤙

What a FINAL… feel bad for @BLACKCAPS well done @ECB_cricket. Have no words. 👍👏👏

Congratulations @ECB_cricket World Champs !!! This will be the greatest final ever .. you can never match it !!!

What a super Sunday. @BLACKCAPS can feel extremely unlucky. Sport at its best!

That is actually brutal…. can we come back tomorrow please? #CWC19Final #ENGvsNZ

Probably the best game of cricket in history #CWC19Final #ENGvsNZ

102 overs of cricket and we decide the game on boundaries. How cruel ! Feel for the @BLACKCAPS Congratulations @ECB_cricket @englandcricket #CWC19Final

Neither Team deserved to lose that .. What a day for Cricket .. that is how it inspire a new generation of cricketers .. #CWC19

OH MY GOD!
What a match for a World Cup Final.
This is as good as a trophy shared.
Match tied, super over tied, England wins on more boundaries hit. Wow. Great scenes at Lords. #ENGvNZ #CWC19

Never seen a match like this and it will never be again.. what a final congratulations to both the team for playing this great final.. Well done @ECB_cricket new CHAMPIONS 🏏🏴󠁧󠁢󠁥󠁮󠁧󠁿🏆

Congratulations to England on winning the Cricket World Cup. New Zealand were outstanding and never gave up, that deflection over-throw of Stokes being a huge turning point, tragic for @BLACKCAPS , so near yet so far but they must be very proud. #CWCFinal19

This Video Of An Old Lady Imitating Bumrah Will Make Your Sunday Even Better
Jofra Archer Is Definitely From The Future, His Tweets About The World Cup Prove That