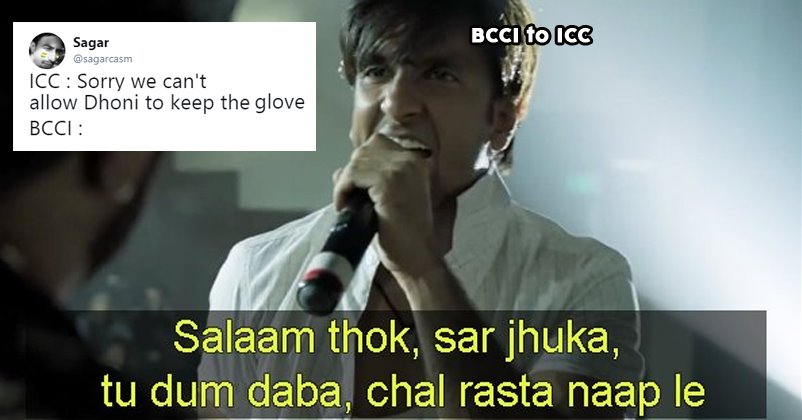 Indian cricket team played its first match of this ICC world cup on June 5 against South Africa. India won the match, South African bowlers missed some very easy catches, Rohit Sharma broke into an impromptu dance of the field but MS Dhoni’s gloves grabbed more attention than anything during the whole match. His gloves created a lot of controversies because an army logo was spotted on it.

A lot of questions were raised on Dhoni’s gloves and ICC asked him to remove the logo. However, BCCI stood in support of Dhoni and requested ICC to reconsider the objections on his gloves, which ICC denied.

According to the ICC regulations, no player is allowed to display any personal message or logo on their clothing or equipment.

But fans don’t care about any rules and regulations when it comes to the former skipper. They came in support of Dhoni and his gloves initiated a trend on twitter ‘#DhoniKeepTheGlove’.

Meanwhile, viewers witnessed poor quality umpiring during a match between Windies and Australia. So fans are also suggesting ICC, to concentrate on important issues like umpiring standards and not on Dhoni’s gloves.

@ICC Kindly check the quality of umpiring first in World cup. Not give importance to #DhoniKeepTheGlove pic.twitter.com/RJ7bX1TPz6

ICC : Sorry we can't allow Dhoni to keep the glove

#IndiaWithDhoni@ICC @BCCI @cricbuzz
Please Go and look for better umpires.. umpires committing such a big mistake is fine.. but someone show his pride for the country is not legal according to you..😂😂#keepthegloves pic.twitter.com/6O1LehaoNt

@msdhoni will #keepthegloves with the `Balidan insignia'. @BCCI is with Dhoni –

ICC : We request BCCI and Dhoni to remove the insignia from the glove :